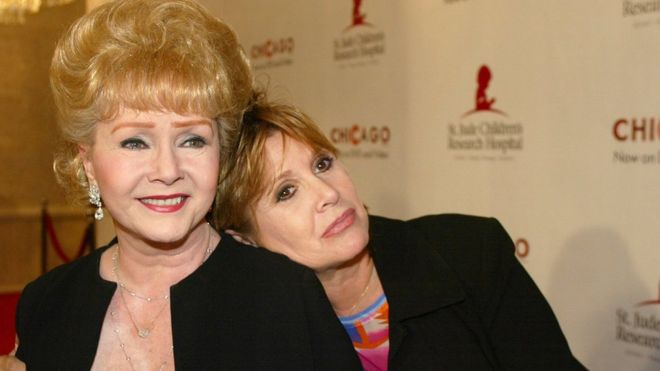 US actress Debbie Reynolds has died, a day after the death of her daughter Carrie Fisher, her son has announced.

US media said the 84-year-old had a stroke. She was taken to a Los Angeles hospital earlier on Wednesday.

The Hollywood legend is best known for her role in the 1952 musical Singin' in the Rain, opposite Gene Kelly.

Fisher - renowned for her role as Princess Leia in the Star Wars series - died on Tuesday aged 60, following a cardiac arrest on a plane.

Reynolds was taken by ambulance to Cedars-Sinai Medical Centre after being taken ill on Wednesday.

He added that the stress of his sister's death "was too much" for their mother.

On Tuesday Reynolds posted a statement about her daughter's death on Facebook: "Thank you to everyone who has embraced the gifts and talents of my beloved and amazing daughter. I am grateful for your thoughts and prayers that are now guiding her to her next stop."

Reynolds was leading lady in a succession of major Hollywood musicals and comedies in the 1950s and 60s.

She rose to stardom with Singin' in the Rain, at the age of only 19.

She received a best-actress Academy Award nomination for the 1964 musical The Unsinkable Molly Brown.

In 2015, she was given a lifetime achievement award by the Screen Actors Guild. The award was presented to her by her daughter. 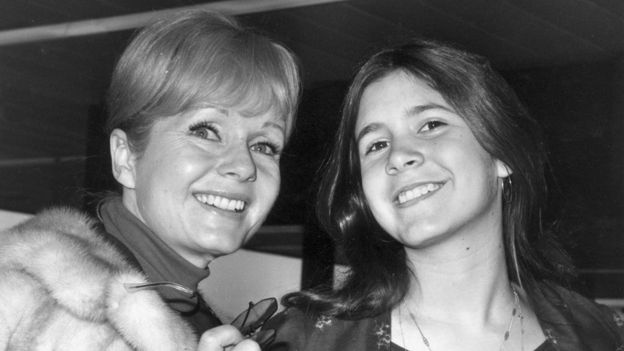 Debbie Reynolds (left) with her daughter Carrie Fisher in 1972

Carrie Fisher died days after suffering a massive heart attack on a flight from London to Los Angeles on Christmas Eve.

She shot to fame in the initial Star Wars series, but had a number of other roles including in Woody Allen's Hannah and Her Sisters (1986) and When Harry Met Sally (1989).

Fisher was also an author and screenwriter. Her semi-autobiographical novel Postcards from the Edge was made into a film, starring Meryl Streep, Shirley MacLaine, and Dennis Quaid.

The story drew on Fisher's struggles with drugs and her sometimes strained relationship with her mother.

The pair stopped speaking to each other for many years, but became closer later in life.

In an interview last month with US radio network NPR, Fisher spoke of their relationship. "She's an immensely powerful woman, and I just admire my mother very much,'' she said.