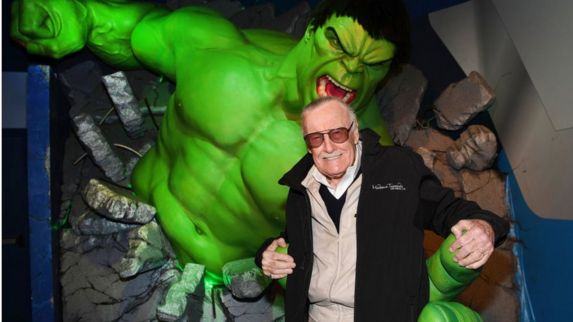 The legendary comic book author died at Cedars Sinai Medical Center in Los Angeles, according to a family lawyer.

The CEO of Lee's Pow! Entertainment praised the "father of pop culture" for inventing "universes of characters".

CEO Shane Duffy called him "a true iconic pioneer with no comparable second".

to celebrity news website TMZ, JC Lee said her father was "the greatest, most decent man".

She told Reuters: "He felt an obligation to his fans to keep creating."

In recent years, Lee had periodically suffered from illnesses, including a bout of pneumonia, US media reported.

Lee was known for making a cameo in every Marvel film, though he had left the Marvel company in 1972. He remained chairman emeritus.

On Sunday, Veteran's Day, his official Facebook page shared a photograph of Lee in the Army, noting his nickname during World War Two was Playwright.

Who was Stan Lee?

Lee was born in 1922 to working-class Jewish immigrants from Romania.

He began working at the comics section of Timely Publications - a company that would eventually transform into Marvel Comics - and became comics editor there at age 18.

But for years Lee wrote only simple comics focusing on crime stories, horrors and westerns aimed at young readers.

At age 40, Lee decided to give up on comics. But his wife Joan urged him to create the characters he always wanted to write as his comic swansong.

And in 1961, Lee and artist Jack Kirby created the Fantastic Four - compelling characters with individual personalities and relatable problems.

Timely Publications was renamed Marvel and the golden age of comic books had begun. 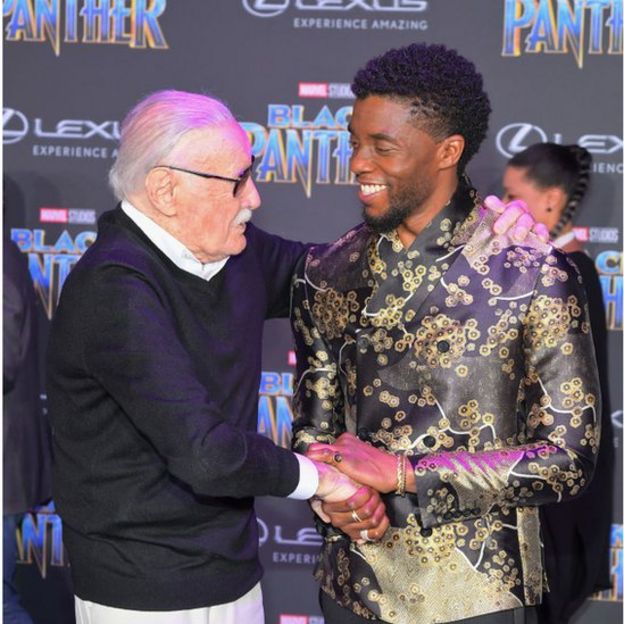 Black Panther (portrayed in film by actor Chadwick Boseman, right) was one of the first black mainstream superheroes in America

Many Marvel characters were groundbreaking at the time. For example, Black Panther was the first black superhero featured in a mainstream US comic.

Other characters he created include the Silver Surfer, the X-Men, Iron Man and Doctor Strange.

Lee was also known for giving artists their due credit. Kirby, Frank Miller, John Romitaand and others achieved cult status in their own right.

In its heyday, Marvel sold 50 million copies a year. Until he retired from editing in 1971, Lee wrote all the copy for Marvel's covers.

Bob Iger, chairman of the Walt Disney Company, which bought Marvel Comics for $4bn (£2.5bn) in 2009, called Lee "a super hero in his own right" in a statement.

"The scale of his imagination was only exceeded by the size of his heart."

Celebrities and fans have been sharing across social media how Lee and his work affected them.

Hugh Jackman, who played Wolverine in the X-Men films, called Lee a "pioneering force in the superhero universe".

Chris Evans, the star of Captain America, wrote on Twitter: "For decades he provided both young and old with adventure, escape, comfort, confidence, inspiration, strength, friendship and joy. He exuded love and kindness and will leave an indelible mark on so, so, so many lives."

Tom Hardy, who stars in the latest Marvel Studios feature, Venom, shared a photo of Lee on set on Instagram.