A celebrity-filled selfie posted by Oscar host Ellen DeGeneres has become the most retweeted image in Twitter's history - even briefly crashing the service.

It took less than 40 minutes to beat the previous record for most tweeted image - a photo of Michelle and Barack Obama, posted on his re-election in 2012.

By the end of the Oscars ceremony, the celebrity selfie had been retweeted more than two million times.

Host DeGeneres encouraged those watching the Oscars - about one billion people - to make the image the most-retweeted in history, and less than an hour later announced the target had been met.

"We crashed Twitter!" she joked, adding that the service was up again shortly after.

Not quite as popular, but perhaps more amusing, was actor Benedict Cumberbatch's surprise attempt to appear in a red-carpet photo of U2. 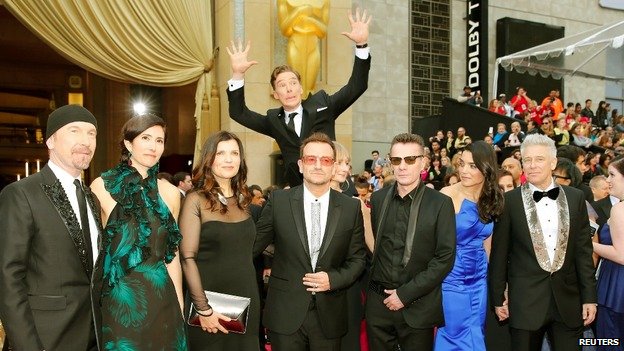 As the band posed in neat line, Cumberbatch "photobombed" the picture by leaping up behind them and pulling a face.

The hashtag #Cumberbomb has cropped up on Twitter, with most users quick to praise the Brit for his sense of humour. KlausisKing said "Best photo bomb ever goes to Benedict Cumberbatch :') seriously how can anyone not love this man :D #Cumberbomb."

Leonardo DiCaprio's fans flooded the social networking site with messages of condolence after he missed out on the Oscar for Best Actor.

The phrase 'Poor Leo' started trending when he failed to win for his performance in The Wolf of Wall Street. The award went to Matthew McConaughey instead for his role in Dallas Buyers Club.

It was the fourth time DiCaprio had been nominated for an Oscar - having been shortlisted for his appearance in What's Eating Gilbert Grape, The Aviator, and Blood Diamond - but he is yet to win.

Poor Leo has been tweeted almost 40,000 times in the last 12 hours, accompanied by a string of images of the actor looking dismayed. Many were overlaid with mock quotes such as "Dear academy why do u hate me, luv Leo".

All in all, there have been more than seven million tweets using the hashtags #oscars and #oscars2014.