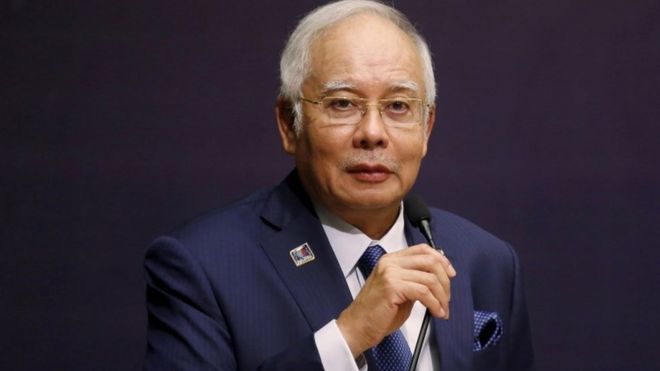 PM Najib Razak's office has said Malaysia will "fully co-operate" with any investigation into state fund 1MDB after the US said it "defrauded" Malaysians.

US authorities moved Wednesday to seize more than $1bn (£761m) in assets from the fund set up by Mr Najib.

Mr Najib is not named but "Malaysia official 1" is identifiable as someone whose account allegedly received funds.

This is a major development in a case that has gripped the region.

Mr Najib was officially cleared of criminality by the country's attorney general earlier this year. He has always denied any wrongdoing.

There is no allegation that Mr Najib spent any of the money but people close to him are accused of using billions of dollars to buy jewellery, art and luxury properties; pay gambling expenses; and hire musicians and celebrities to attend parties.

'Money laundered through US accounts'

A spokesperson for Mr Najib said the government would "fully co-operate with any lawful investigation of Malaysian companies or citizens in accordance with international protocols".

"As the prime minister has always maintained, if any wrongdoing is proven, the law will be enforced without exception."

A construction worker walks past a 1MDB sign in KL, MalaysiaImage copyrightREUTERS

The court papers, filed in Los Angeles, allege that misappropriated 1MDB money was laundered through accounts in the US.

The US justice department alleges the money financed lavish lifestyles of "multiple individuals including public officials".

If successful, the US justice department intends to seize assets including property in the US, UK and Switzerland.

Singapore fraud investigators said on Thursday they had seized more than $175m in assets connected to 1MDB and found several major banks, including Standard Chartered, had showed "weaknesses in the processes for accepting clients and monitoring transactions".

What does the US allege the money was spent on?

Source: US Department of Justice

The $1bn would only make up a proportion of the money that was allegedly diverted, which comes to more than $3.5bn (£2.6bn).

Mr Najib's stepson, Riza Aziz- who produced the Leonardo DiCaprio film The Wolf of Wall Street - is named in the court papers, as are a Malaysian financier and two Abu Dhabi government officials.

The fund started to attract attention in early 2015 when it missed payments for the $11bn it owed to banks and bondholders.

The Wall Street Journal (WSJ) reported it had seen a paper trail that allegedly traced close to $700m from the troubled fund to Mr Najib's personal bank accounts.

1MDB said in a statement last year that it had never given money to the prime minister and called the claims "unsubstantiated". It has repeatedly stated that the company has assets worth more than its debts.