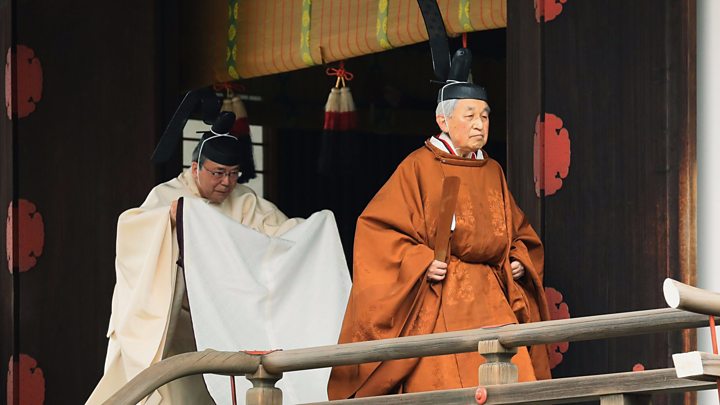 Emperor Akihito is preparing to step down from the throne, becoming the first Japanese monarch to abdicate in more than 200 years.

The 85-year-old has been given legal permission to abdicate after saying he felt unable to fulfil his role because of his age and declining health.

His son, Crown Prince Naruhito, will ascend the Chrysanthemum throne the next day, beginning a new era.

The emperor in Japan holds no political power but serves as a national symbol.

Emperor Akihito's reign has been marked by his interactions with people suffering from disease and disaster, which have endeared him to many Japanese people.

In the first private ceremonies of the day, the emperor reported his abdication to the mythological ancestors of Japan's imperial family.

What will happen at the abdication ceremony?

The Taiirei-Seiden-nogi, or main Ceremony of the Abdication of His Majesty the Emperor, is expected to take place at the Matsu-no-Ma state room in the Imperial Palace.

It begins at 17:00 local time (08:00 GMT) with Emperor Akihito and Empress Michiko entering the room and will last about 10 minutes. Over 330 attendants will also be present.

The ceremony will end with Akihito delivering his final address as emperor, though he will technically remain emperor until midnight.

Tuesday's events will be the first time anyone alive will get to watch a Japanese abdication ceremony.

On Wednesday morning, Crown Prince Naruhito will inherit the Imperial Treasures in his first ritual as emperor. 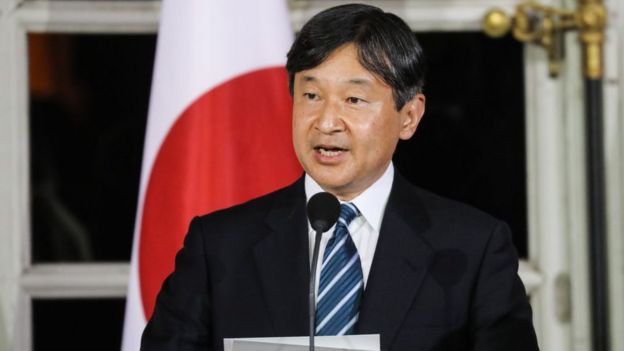 Why did the emperor decide to abdicate?

Akihito will be the first Japanese monarch to voluntarily relinquish the throne since 1817.

The 85-year-old said in a rare address in 2016 that he feared his age would make it hard for him to carry out his duties and strongly hinted that he wanted to stand down.

"When I consider that my fitness level is gradually declining, I am worried that it may become difficult for me to carry out my duties as the symbol of the State," he had said then.

Opinion polls showed that the vast majority of Japan sympathised with the emperor's desire to retire and a year later parliament enacted a law that made his abdication possible.

Who is the crown prince?

Prince Naruhito is set to become Japan's 126th emperor - and will officially lead the country into the new Reiwa era. It will mark the end of the current Heisei era, which began when Akihito ascended the throne in 1989.

The 59-year-old Naruhito was educated in Oxford and become crown prince at the age of 28.

In 1986, he reportedly met his wife Crown Princess Masako Owada at a tea party. They married in 1993.

The couple's only child, Princess Aiko, was born in 2001. However, Japan's current law restricts females from inheriting the throne so she is not her father's heir.

Her uncle Prince Fumihito is first in line to the throne, followed by her cousin, 12-year-old Prince Hisahito.

How are Japanese people marking the handover?

The country's Golden Week break - its annual spring holiday - has been extended to a record 10 days this year to mark the ascension of the new emperor.

The abdication is seen as an almost festive affair, in contrast to when Emperor Akihito succeeded his father 30 years ago following his death, while the country was in mourning. 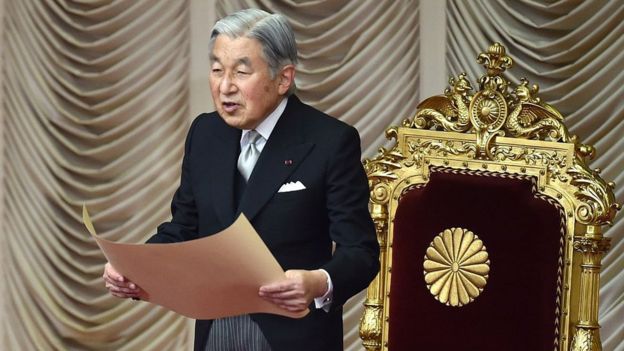 This time, people will be going on holidays, flocking to cinemas, or staying at home to watch the abdication and ascension ceremonies - which will both be live-streamed.

Many said they would miss the departing emperor, who will now hold the title "Joko", which means "grand emperor" - and the English title "Emperor Emeritus".

"I think the emperor is loved by the people," Morio Miyamoto told Reuters news agency. "His image is one of encouraging the people, such as after disasters, and being close to the people."

"The emperor worked very hard for 30 years so I hope the handing over of the baton to the new emperor will go smoothly," Mikiko Fujii told the agency.

"I'm sad but also hopeful about the next era. I hope it will be a peaceful, gentle period for the second half of my life," said Masatoshi Kujirai, on his way to a Shinto shrine to mark the day.

Why is the Japanese monarchy important?

It's the oldest continuing hereditary monarchy in the world. Legends date it back to about 600 BC.

In fact, Japanese emperors used to be seen as gods, but the country's previous emperor Hirohito - the father of Akihito - publicly renounced his divinity at the end of World War Two, as part of Japan's surrender.

It was Emperor Akihito who helped repair the damage to Japan's reputation after the war.

Previous emperors rarely interacted with the public, but Akihito redefined the role - and has come to be known for his compassion.

In 1991, two years after he ascended the throne, Akihito and the empress broke with norms and kneeled down to speak to people affected by a volcanic eruption in Nagasaki.

Their interactions with people suffering from chronic diseases such as leprosy, who have been marginalised in Japan, were also a sharp departure from the past. 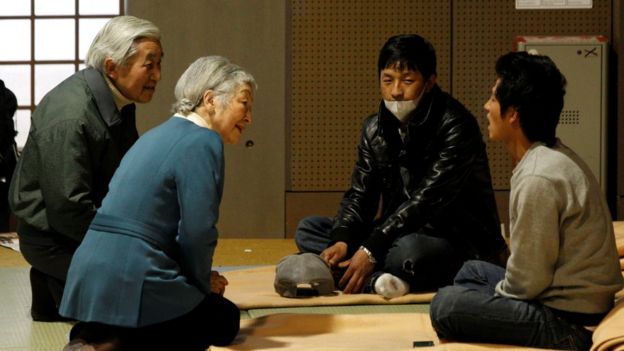 Finally, Akihito also took up the role of a diplomat, becoming an unofficial ambassador for Japan and travelling extensively to other countries - something Naruhito is expected to continue.

While Tuesday sees the first abdication in 200 years, it wasn't so rare historically.

According to Japan's state broadcaster NHK, about half the country's emperors or empresses have done the same, and it happened frequently from the 8th Century to the 19th Century. 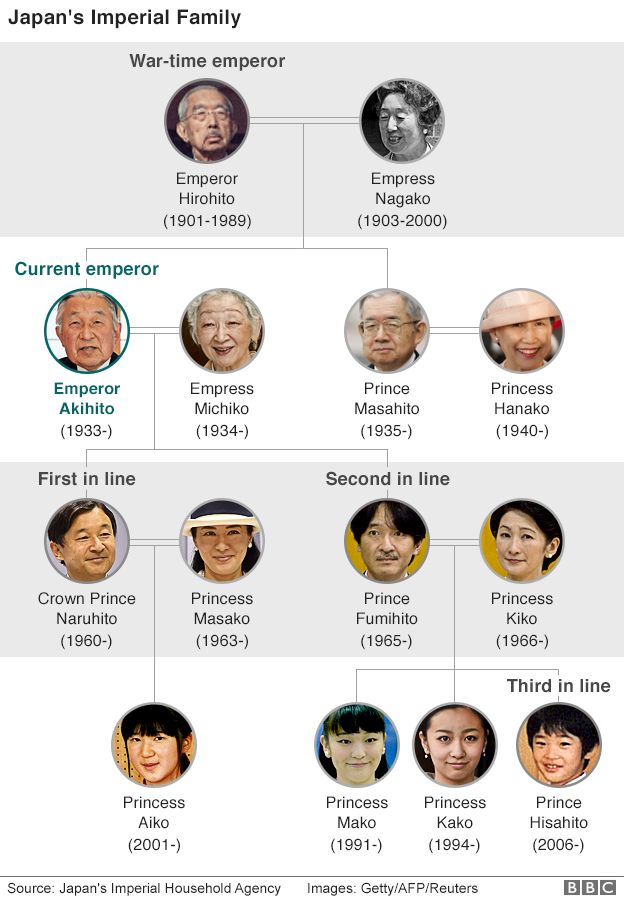