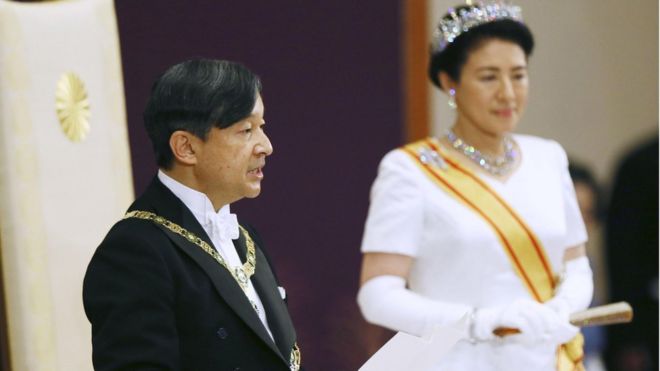 Emperor Naruhito was accompanied by his wife, Empress Masako, as he spoke at the Imperial Palace

Japan's Emperor Naruhito has given his first address after ascending the throne, expressing his hope for happiness and world peace.

His ascension was formalised earlier on Wednesday in a ceremony that saw him inherit the Imperial Treasures.

A new imperial era called Reiwa - which means order and harmony - has begun and will last throughout his reign.

His 85-year-old father Akihito became the first emperor to abdicate in more than 200 years on Tuesday.

In a short speech at the Imperial Palace, Emperor Naruhito said he hoped "for the happiness of the people... progress of the country, and world peace".

Naruhito, 59, also expressed gratitude towards his father Emperor Emeritus Akihito, his voice breaking when he talked about Akihito's service to his country.

"[He] performed each of his duties in earnest for more than 30 years," he said. "He showed profound compassion through his own bearing. I would like to express my heartfelt respect and appreciation."

What happened at the ceremony?

Naruhito, became emperor at midnight on Tuesday when the new era began in Japan, but he then took part in a ceremony that formalises his ascension to the Chrysanthemum throne.

The Kenji-to-Shokei-no-gi - or Ceremony for Inheriting the Imperial Regalia and Seals began at 10:15 local time (01:15 GMT) on Wednesday. Female royals are not allowed to be there so Empress Masako, Emperor Naruhito's wife, was not present.

Naruhito symbolically received two objects - a sword and a gem - which are passed down through generations of emperors and are seen as the symbols of imperial power.

There is one additional object, a mirror, and together the three make up the Imperial Treasures or Regalia. However, the mirror - considered the most precious of the treasures - which is believed to be kept at the Ise Grand Shrine in Mie prefecture, never leaves its resting place.

Female royals were allowed to attend the second part of the ceremony, where the emperor gave his first audience after ascending the throne.

What do we know about the new emperor?

Naruhito, born in 1960, is a graduate of Oxford University. He became crown prince at the age of 28. 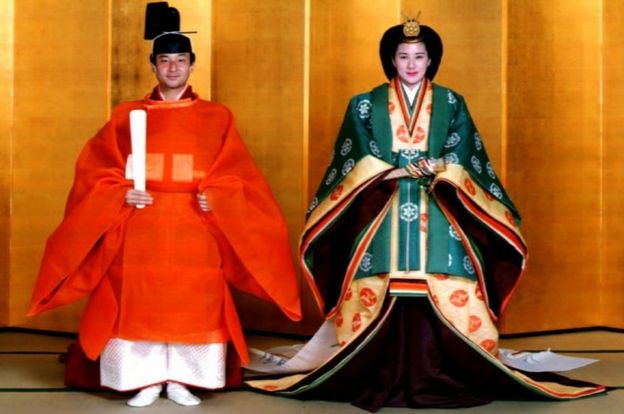 Naruhito and Masako in their Japanese Imperial wedding costumes in 1993

Empress Masako later told reporters that she had accepted Naruhito's proposal after he said: "You might have fears and worries about joining the imperial household. But I will protect you for my entire life."

Masako, who reportedly suffers from a stress disorder, had admitted in December that she felt "insecure" about becoming empress, but pledged to do her best to serve the people of Japan.

Masako was educated at Harvard and Oxford, and had a promising career as a diplomat before her marriage.

The couple's only child, Princess Aiko, was born in 2001. However, Japan's current law restricts females from inheriting the throne.

Naruhito's brother Prince Fumihito will be next in line to the throne, followed by the new emperor's nephew, 12-year-old Prince Hisahito.

Why is the Japanese monarchy important?

It's the oldest continuing hereditary monarchy in the world. Legends date it back to about 600 BC.

In fact, Japanese emperors used to be seen as gods, but the country's wartime emperor Hirohito - Naruhito's grandfather - publicly renounced his divinity at the end of World War Two, as part of Japan's surrender. 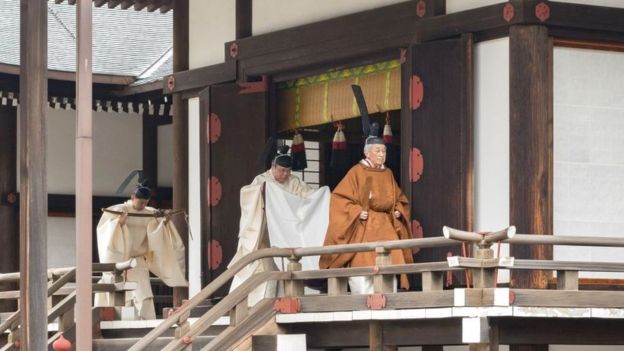 The role was redefined by Emperor Akihito, who helped repair the damage to Japan's reputation after the war.

He also endeared himself to many Japanese people by interacting with those suffering from natural disasters and disease.

Akihito will now be known as "Joko", which means "grand emperor", and by the English title "Emperor Emeritus", while his wife Michiko will be "Empress Emerita".