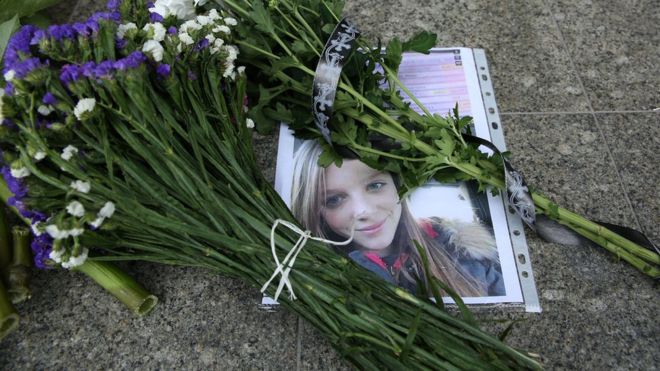 All 283 passengers, including 80 children, and 15 crew members were killed

Investigators probing the downing of a Malaysia Airlines jet in eastern Ukraine in 2014 will present new evidence later on Wednesday.

The Dutch-led Joint Investigation Team (JIT) is expected to name suspects and announce charges for the first time.

Flight MH17 was flying from Amsterdam to Kuala Lumpur when it was shot down, killing all 298 on board.

Investigators have blamed pro-Russian separatists who they say targeted the plane with a Russian-made missile.

The Boeing 777 crashed in rebel-held eastern Ukraine on 17 July 2014, at the height of the conflict between government troops and Russian-backed separatists.

Russia has denied any involvement and has maintained the missile was fired from Ukrainian-held territory.

Dutch investigators will hold a press conference at 13:00 local time (11:00 GMT) on Wednesday after briefing relatives of victims.

What will investigators say?

The JIT, which seeks to try the suspects under Dutch law, has previously said it had a "long list" of persons of interest and appealed for witness help.

On Friday, prosecutors announced the release of new findings, prompting widespread reports in Dutch media that suspects will be named. 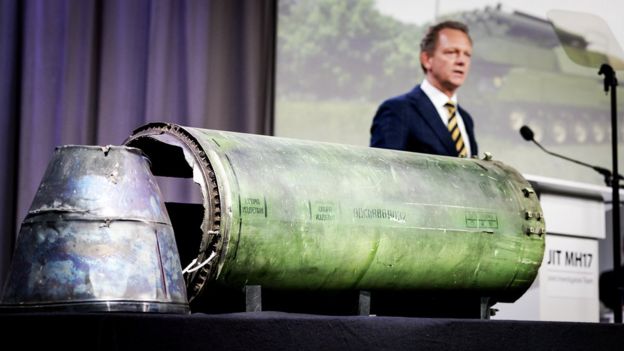 Kateryna Zelenko, a spokeswoman for Ukraine's foreign ministry, told the Unian news agency on Tuesday that "as early as tomorrow the world will hear the names of the first four people suspected of involvement".

Ms Zelenko said Dutch prosecutors would then file the case in a Netherlands court.

"The guilt of the four suspects must be proved first and foremost in court," the spokeswoman added.

Internet open source investigators Bellingcat are also due to release a new report into the crash.

What is known about the crash?

MH17 left Amsterdam's Schiphol Airport at 10:15 GMT on 17 July 2014 and was due to arrive at Kuala Lumpur in Malaysia the following day.

About four hours after take-off, the plane lost contact with air traffic control about 50km (30 miles) from the Russia-Ukraine border. 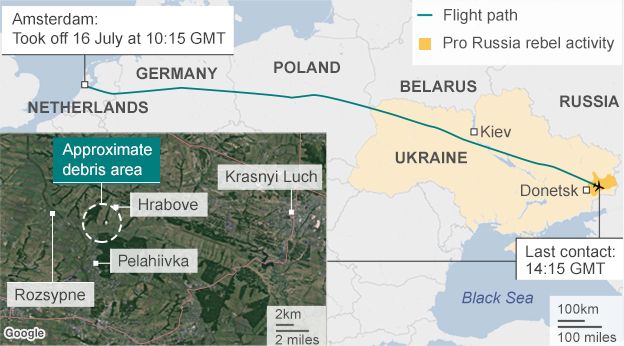 The plane crashed in the Donetsk area, in territory controlled by separatists. Parts of the wreckage were found distributed over an area of about 50 sq km.

In October 2015 the Dutch Safety Board concluded the plane had been hit by a Buk missile, causing it to break apart in mid-air.

In 2016, the JIT - which includes officials from the Netherlands, Australia, Belgium, Malaysia and Ukraine - reached a similar conclusion.

The Dutch-led team concluded in May 2018 that the missile system belonged to the 53rd Anti Aircraft Missile brigade, based in the western Russian city of Kursk. It produced evidence it said proved how the missile system reached Ukraine.

Russia responded by denying any of its anti-aircraft missile systems had ever crossed the Ukrainian border. Its foreign ministry has accused the JIT investigation of being "biased and politically motivated".

Australia and the Netherlands have both officially held Russia responsible for the crash.

A total of 283 passengers, including 80 children, and 15 crew members were killed on the flight.

Delays and difficulties in the recovery of victims' remains in the crash aftermath prompted widespread international criticism.