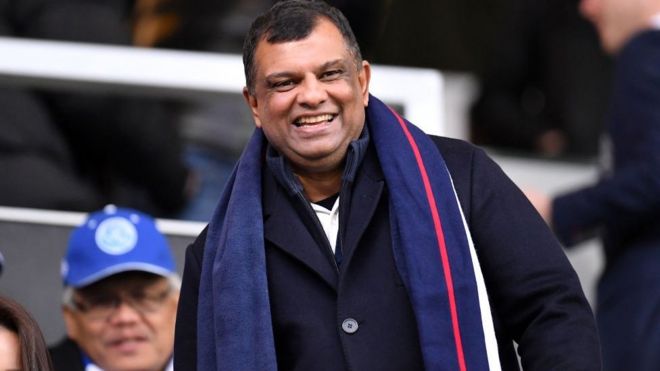 Tycoon Tony Fernandes has stepped aside as the chief executive of AirAsia while authorities probe bribery claims.

He will stand down for least two months from the company he turned into Asia's biggest budget airline.

AirAsia has been pulled into investigations which have seen European planemaker Airbus fined a record €3.6bn (£3bn).

Mr Fernandes, who co-owns Queens Park Rangers (QPR) football club in the UK, will remain as an adviser to AirAsia.

Educated at Epsom College, one of Britain's top fee-paying schools, Mr Fernandes bought AirAsia from the Malaysian government for less than a dollar in 2001.

He is now one of the wealthiest men in Malaysia, with a net worth of $530m, according to the Forbes rich list.

Both Mr Fernandes and chairman Kamarudin Meranun have said they will step aside while authorities investigate allegations that Airbus paid a bribe of $50m to AirAsia.

In a statement, the pair announced that they were stepping aside "to facilitate a full and independent inquiry" and would be ''relinquishing our executive roles with immediate effect''.

AirAsia has said it will fully co-operate with Malaysia's Anti-Corruption Commission, which is working alongside Britain's Serious Fraud Office (SFO) to investigate the claims.

Along with a majority stake in QPR, the sports-loving entrepreneur co-founded the now-defunct Caterham Formula 1 racing team.

Since Mr Fernandes bought AirAsia, he has built a company with a market valuation of more than $1bn.

AirAsia's share price tumbled 11% on Monday after the Malaysian investigation was launched. It slipped again on Tuesday on the news that Mr Fernandes is standing aside.