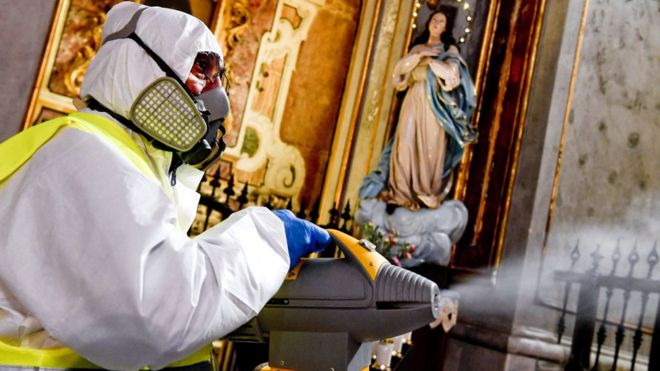 Churches have been fumigated in Naples

The death toll from the new coronavirus in Italy has risen to 197 after the largest daily increase in fatalities there since the outbreak began.

Officials said 49 people had died in 24 hours, while more than 4,600 cases have been reported in total.

The country has now reported the most deaths outside of China, where the virus emerged in December.

More than 3,000 people have died - the majority in China.

WHO director general Tedros Adhanom Ghebreyesus called the spread of the virus "deeply concerning" and urged all countries to make containment "their highest priority".

What is happening in Italy?

Officials announced the record daily death toll in a statement on Friday.

They said the number could not be officially confirmed until health officials had "established the actual cause of death".

According to government data, 4.25% of confirmed coronavirus cases have died, the highest rate in the world.

Italy has one of the world's oldest populations.

The government this week ordered the closure of all schools for 10 days as it battles to contain the outbreak.

All professional sport, including Serie A football matches, will also be played behind closed doors for a month.

The BBC's Rome correspondent Mark Lowen tweeted that a resident in the quarantined Italian town of Codogno told him the most upsetting thing for many people there is that funerals are not being permitted for coronavirus victims because of the need to limit gatherings.

"Priests are saying a couple of prayers - and that's it," he wrote.

Only China, South Korea and Iran have reported more coronavirus cases than Italy.

What are the latest updates?