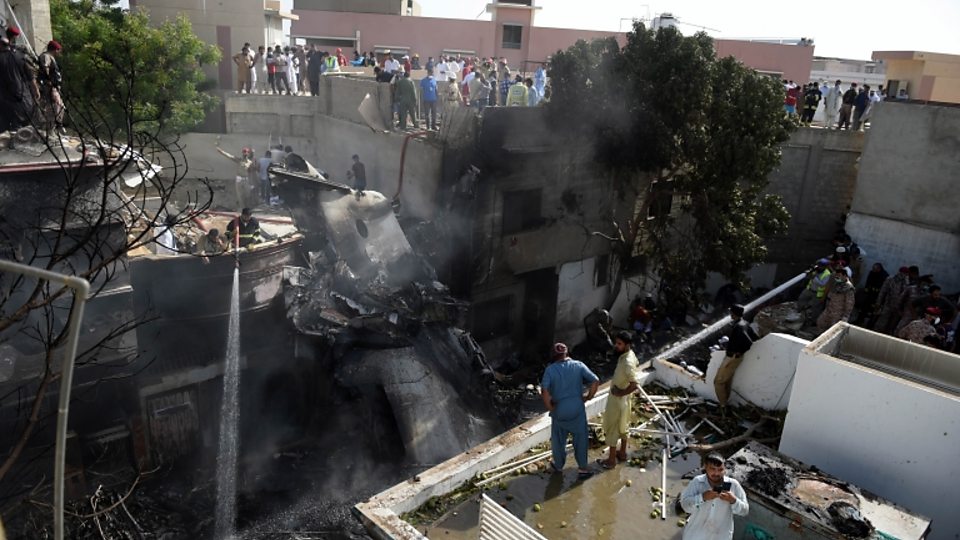 The crash happened in the Model Colony residential area

A Pakistan International Airlines (PIA) passenger plane flying from Lahore has crashed into a residential area of Karachi, killing at least 76 people.

The pilots of flight PK8303, an Airbus A320 carrying 91 passengers and eight crew, were attempting to land at the city's Jinnah International Airport.

The plane had attempted one landing but as it went round again lost its engines and issued a mayday call.

At least two passengers are confirmed to have survived the crash.

One, Muhammad Zubair, has been describing his ordeal, recalling how he lost consciousness then woke up to smoke and screaming.

What caused the crash?

It has yet to be confirmed but here is what we know so far.

Flight PK8303 was approaching Jinnah International Airport at about 14:30 local time (09:30 GMT). It had been given permission to land but the pilots decided to abort and go around for a second attempt.

The reason is not yet known, but one civil aviation official told Reuters the plane may have been unable to lower its undercarriage. Images posted on social media appeared to show scorch marks under both engines, with no undercarriage visible on approach. 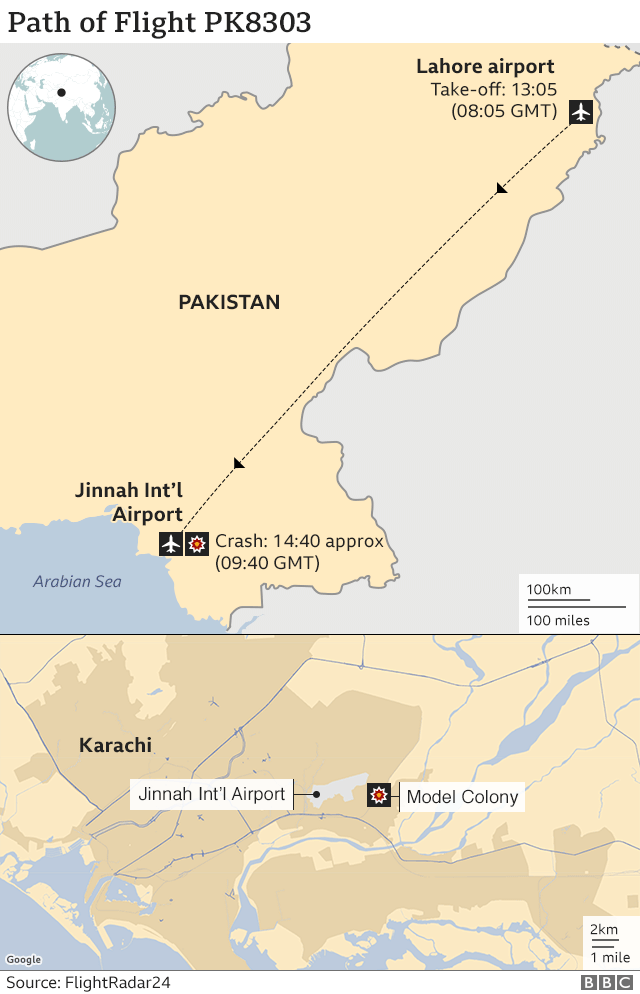 Purported audio of the conversation between air traffic control and a pilot for the second attempt was published by Pakistani media outlets, in which the pilot is heard saying the plane has "lost engines". An air traffic controller asks whether it is going to carry out a "belly landing", to which the pilot replies "mayday, mayday, mayday" - the final communication from the plane.

The survivor, Muhammad Zubair, said there were 10-15 minutes between the first attempt at landing and the crash. "No-one was aware that the plane was about to crash; they were flying the plane in a smooth manner," he said.

Investigators will try to retrieve the so-called black box recorders to help determine the cause. A committee of investigation has already been set up.

PIA said the plane had joined the fleet in 2014 and passed its annual airworthiness inspection last November.

Pakistanis across the country are preparing to celebrate the end of Ramadan, with many travelling back to their homes in cities and villages.

What happened at the crash scene?

The plane was only just short of the runway perimeter when it struck houses in the Model Colony residential area. TV footage showed rescue crews combing through debris strewn across the streets of the densely populated zone. A number of cars were set on fire.

Passenger Muhammad Zubair, who suffered only minor injuries, said that, when he came to, "I could hear screams from all directions. Kids and adults. All I could see was fire. I couldn't see any people - just hear their screams".

He added: "I opened my seatbelt and saw some light - I went towards the light. I had to jump down about 10ft (3m) to get to safety." 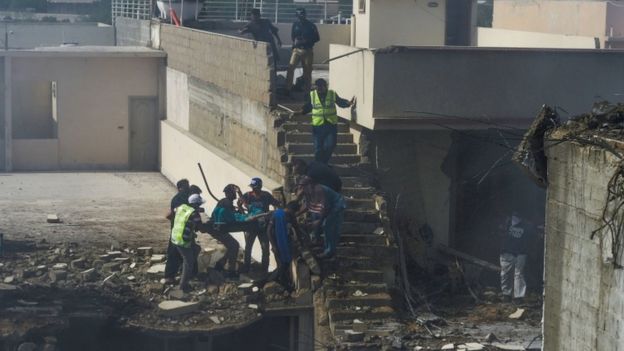 Rescuers evacuate an injured resident from the site, where a number of houses were destroyed

Eyewitness Mohammed Uzair Khan told the BBC he had heard a massive sound and went outside his home. "Almost four houses were completely collapsed, there was so much fire and smoke," he said. "They are almost my neighbours, I can't tell you what a horrible thing it was."

What do we know about the casualties?

Local health officials at two hospitals, the Jinnah and Civic hospitals, gave death tolls to the BBC and Pakistani media, adding up to 76 confirmed deaths. But it was not clear how many of the dead were passengers and how many residents on the ground.

Zafar Masud, president of the Bank of Punjab, was the other passenger who survived the crash, a provincial government spokesman said. Both were at the front of the plane. There are reports of other survivors but these have not been confirmed.

A senior journalist at TV channel 24 News, Ansar Naqvi, and an ex-head of the Punjab Disaster Management Authority, Khalid Sherdil, were also listed on the passenger manifest. 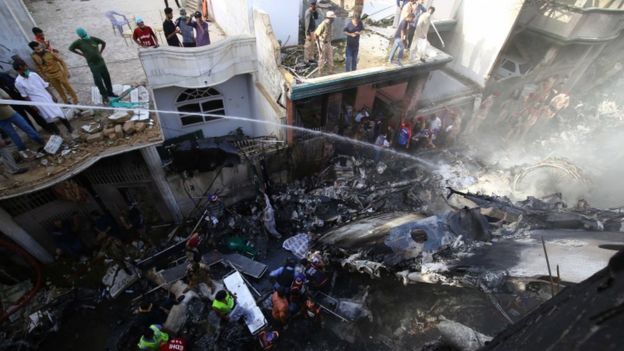 The crash site was just short of the airport perimeter

Pakistan's Prime Minister Imran Khan said he was "shocked and saddened" by the crash, promising an immediate investigation.