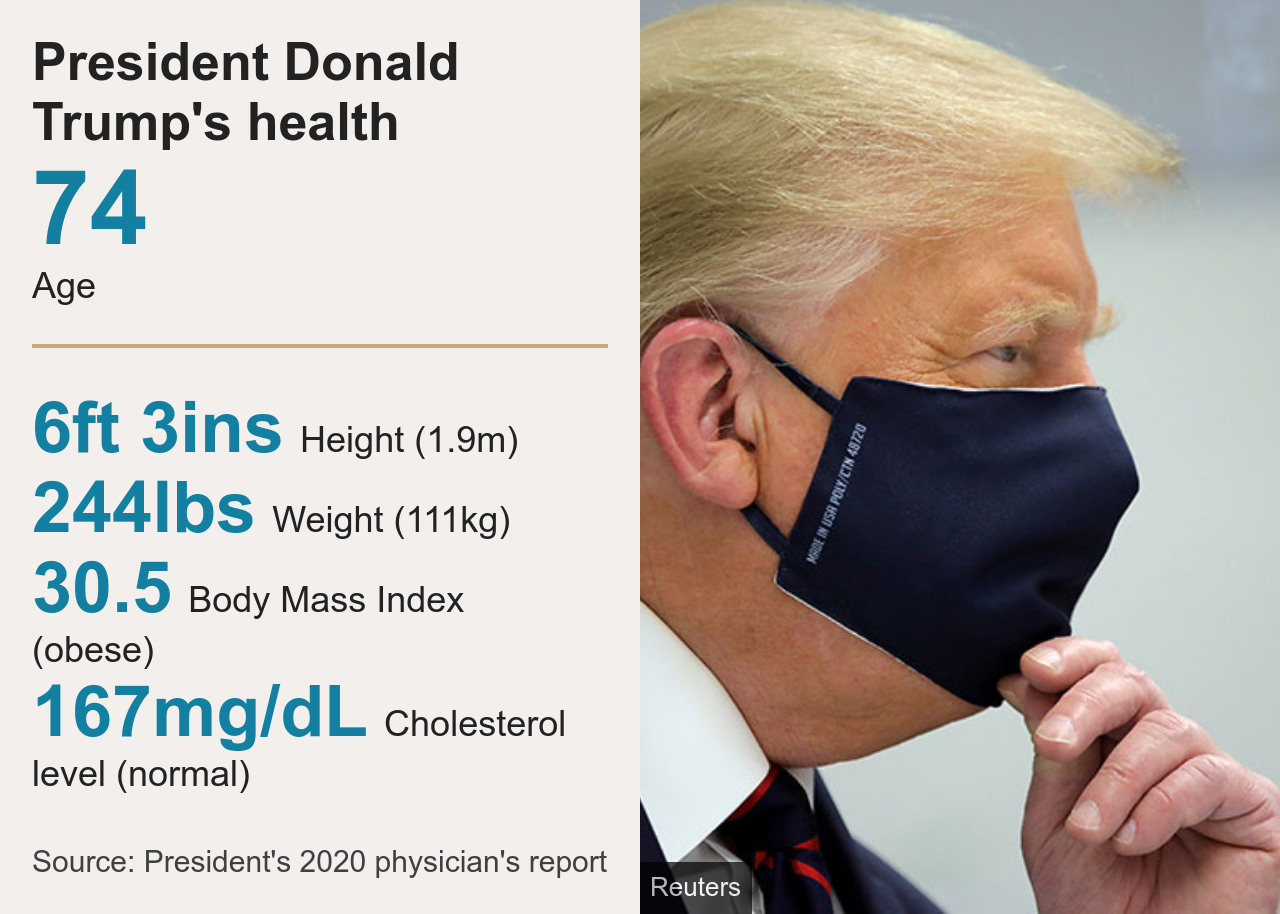 US President Donald Trump has been flown to hospital less than 24 hours after testing positive for coronavirus.

The White House said the decision to transport him to Walter Reed National Military Medical Center was taken "out of an abundance of caution".

Mr Trump - who had a fever - said early on Friday he and First Lady Melania Trump had tested positive for Covid-19.

The White House said he was feeling "fatigued but in good spirits" and was experiencing mild symptoms.

The news comes just over a month before presidential elections, where he will face Democratic challenger Joe Biden.

How did the president look on Friday?

Wearing a mask and suit, Mr Trump walked out across the White House lawn on Friday afternoon to his helicopter, Marine One, for the short trip to hospital.

He waved and gave a thumbs-up to reporters but said nothing before boarding the aircraft.

In a video posted to Twitter, Mr Trump said: "I want to thank everybody for the tremendous support. I'm going to Walter Reed hospital. I think I'm doing very well.

"But we're going to make sure that things work out. The first lady is doing very well. So thank you very much, I appreciate it, I will never forget it - thank you."

The president's children, Ivanka and Eric, retweeted his post, praising him as a "warrior". Ms Trump added: "I love you dad."

Upon arrival at Walter Reed, the president did not go to the emergency room for treatment, but went directly to the hospital's presidential suite, according to the BBC's US partner, CBS News.

What is the White House saying?

White House press secretary Kayleigh McEnany said in a statement: "President Trump remains in good spirits, has mild symptoms, and has been working throughout the day.

"Out of an abundance of caution, and at the recommendation of his physician and medical experts, the president will be working from the presidential offices at Walter Reed for the next few days.

"President Trump appreciates the outpouring of support for both he and the first lady."

Mr Trump's symptoms include a low-grade fever, according to CBS.

Walter Reed, in the Washington DC suburbs, is one of America's largest and most renowned military medical centres. It is where US presidents usually go for their annual check-ups.

"The president is in charge," she said.

But he pulled out of a video conference call with vulnerable seniors scheduled for Friday, leaving Mr Pence to chair the meeting.

Under the US constitution, if Mr Trump did become too ill to carry out his duties, he could hand over his powers to the vice-president temporarily. That means Mike Pence would become acting president until Mr Trump was fit again and could resume work.

What treatment has the president already received?

Mr Trump's physician Sean Conley said in a statement earlier on Friday that the president had "as a precautionary measure received an 8g dose of Regeneron's polyclonal antibody cocktail" at the White House.

The medication is administered to help reduce virus levels and speed recovery.

"As of this afternoon he remains fatigued but in good spirits," he added. The first lady, who is 50, was "well with only a mild cough and headache".

On Friday afternoon, Mrs Trump said she was experiencing mild symptoms but is "feeling good" and "looking forward to a speedy recovery".

The remainder of the Trumps' family, including the first couple's son Barron who also lives at the White House, tested negative.

How have Democrats reacted?

Mr Biden, the Democratic nominee, and his wife Jill tested negative on Friday.

"I hope this serves as a reminder," the White House candidate tweeted after the result. "Wear a mask, keep social distance, and wash your hands."

The Biden campaign said it was in the process of temporarily taking down all its negative ads regarding Mr Trump.

Mr Biden's staff said he would travel to Michigan on Friday as planned for several campaign events. He and his wife have wished the presidential couple a speedy recovery.

How did the president contract the virus?

It is not known how exactly Mr and Mrs Trump became infected. On Thursday, the first couple said they intended to self-isolate after one of Mr Trump's closest aides, Hope Hicks, tested positive. Soon afterwards, they too received positive test results.

There has been criticism of Mr Trump's decision to go to a fundraiser attended by dozens of people in New Jersey on Thursday, apparently when officials already knew about Ms Hicks' symptoms.

Officials said the process of tracking all the president's contacts in recent days was ongoing, adding that Mr Trump was considering how he might address the nation or otherwise communicate with the American people on Friday.

Republican National Committee Chairwoman Ronna McDaniel, who was with Mr Trump a week ago, has tested positive, the party said on Friday. Two US senators, Mike Lee and Thom Tillis, who were recently in the president's orbit too, were also confirmed on Friday to have tested positive.

Both of them attended Mr Trump's unveiling of his Supreme Court nominee, Judge Amy Coney Barrett, at the White House last Saturday.

Judge Coney Barrett tested positive for coronavirus earlier this year but has since recovered, according to unnamed officials quoted by the Washington Post.