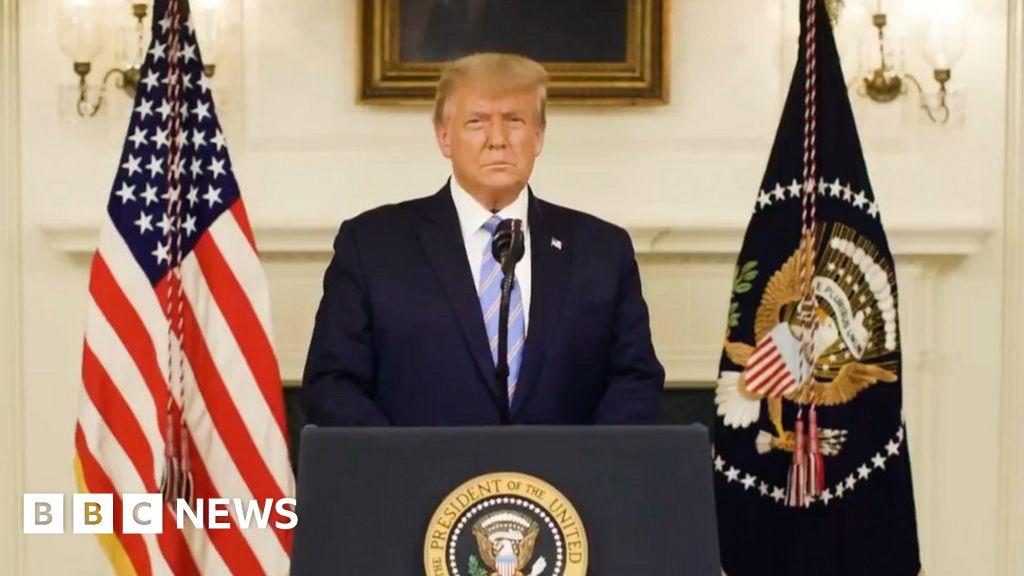 US President Donald Trump has committed to an "orderly" transition of power a day after his supporters stormed Congress, provoking world condemnation.

Allowed back on Twitter after a suspension, the Republican president decried the rioters' "heinous attack".

He spoke as top Democrats called for him to be removed from office, just 13 days before he is due to step down.

Mr Trump's remarks were widely seen as his first public acknowledgement of his defeat in November's election.

In November he denied conceding after tweeting about Democratic US President-elect Joe Biden: "He won because the Election was Rigged."

Mr Trump returned to Twitter on Thursday evening, following a 12-hour freeze of his account after the social media company said his tweets could risk more violence. In new video message, he said: "Now Congress has certified the results a new administration will be inaugurated on January 20th.

"My focus now turns to ensuring a smooth, orderly and seamless transition of power. This moment calls for healing and reconciliation."

He also praised his "wonderful supporters" and promised "our incredible journey is only just beginning".

In the clip he barely touched on his baseless claims of voter fraud that riled up diehard supporters on Wednesday in a rally outside the White House, before they marched to the Capitol and forced their way inside.

The stunning breach of the seat of US government forced Vice-President Mike Pence and lawmakers to be evacuated and postpone for several hours their certification of Mr Biden's victory over Mr Trump.

"The President's dangerous and seditious acts necessitate his immediate removal from office," said the two Democrats in a joint statement.

If the vice-president failed to act, Mrs Pelosi indicated she would convene the House to launch the second impeachment proceedings against Mr Trump.

Four people have been confirmed dead in Wednesday's mayhem in the US Capitol.

Ashli Babbitt, a 35-year-old US Air Force veteran from San Diego, California, was fatally shot by a police officer.

They were named on Thursday as Benjamin Phillips, 50, from Pennsylvania; Kevin Greeson, 55, from Alabama; and Rosanne Boyland, 34, from Georgia.

Media reports circulated on Thursday evening that a US Capitol Police officer had also died.

Congressman Dean Phillips, a Minnesota Democrat, tweeted: "I've been advised a US Capitol Police officer has died of injuries sustained in yesterday's assault on the Capitol."

But US Capitol Police later said the reports were inaccurate.

"Although some officers were injured and hospitalized yesterday, no USCP officers have passed away," the statement said.

Police said on Wednesday that 14 police officers had been injured in the riot. One had received "significant facial injuries" after being hit by a projectile. Another also needed hospital treatment after being dragged into a crowd and assaulted.