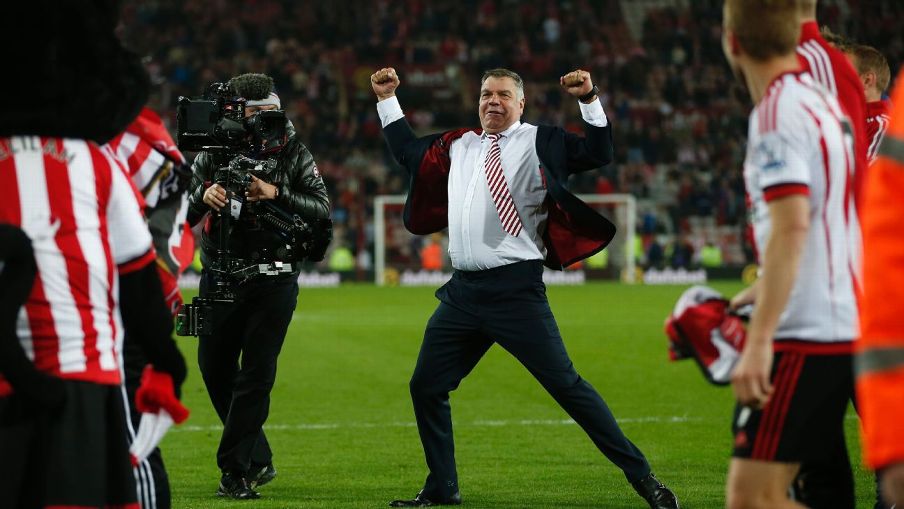 After securing his club's safety, Sunderland manager Sam Allardyce can release his emotion with the home crowd.

Sunderland ensured their Premier League survival, and in the process relegated both Newcastle United and Norwich City, with a 3-0 win over Everton at the Stadium of Light on Wednesday.

It was an easy victory for Sam Allardyce's team, stretching their form at the crucial stage of the season to one defeat in 10 -- with a five-game unbeaten run from which they have picked up 11 points from a possible 15.

Sunderland took the lead in the 38th minute, much to the relief of the home fans. Patrick van Aanholt curled in a free kick and Everton goalkeeper Joel Robles inexplicably moved to his side expecting the ball to go in the other direction -- it nestled into the net where Robles had been stood.

It was 2-0 just four minutes later when Lamine Kone scored his first goal for the club, lashing in a finish that gave Robles no chance after Leighton Baines had played him onside from a Yann M'Vila headed pass.

Any half-time nerves the supporters may have had were soon banished, as Kone netted his second 10 minutes into the second half. Everton made a mess of dealing with a corner, and Kone was on hand to power an effort over the line.

Securing their Premier League status was all the more sweet as it condemned arch-rivals Newcastle to relegation, the Magpies facing the drop into the Championship once again after six seasons in the top flight.

Norwich put on a show for the home fans, but it was all for naught as Sunderland's result dooms them to relegation.

Norwich played some of their best football of the season in beating Watford 4-2 at Carrow Road, but it wasn't enough to save them.

Troy Deeney gave the visitors the lead in the 11th minute, but it didn't last long. Nathan Redmond levelled within four minutes when Heurelho Gomes made a hash of keeping out the winger's effort, and moments late the Canaries were in front thanks to Dieumerci Mbokani.

It got even better for Alex Neil's men in the 37th minute when Craig Cathcart put through his own net.

Odion Ighalo reduced the arrears six minutes after half-time, but any hopes Watford had of getting anything out of the game were hit when Mbokani notched his second of the match in the 57th minute after latching onto a Redmond through ball.

Despite picking up a much-needed three points, they remain four points behind Sunderland with just one game left.

The ESPN FC guys share no sympathies for Eden Hazard after his 'inconsistent' season for Chelsea.

The day's other game saw Liverpool and Chelsea meet at Anfield in a decidedly low-key affair.

Guus Hiddink's side looked to be on their way to victory on Merseyside, Eden Hazard scoring the opening goal of the game just after the half hour.

Hazard, who has finally rediscovered some goal-scoring form at the end of a miserable season, found the bottom corner from a Baba Rahman assist.

But in the second minute of stoppage time Christian Benteke scored to earn a 1-1 draw. Substitute Sheyi Ojo delivered the cross from the left, and Asmir Begovic's attempt to claw the ball away from goal only saw it fall onto the head of the Belgium international who could not miss from six yards out.