Adam Lallana ensured Sam Allardyce's reign as England manager got off to a dramatic winning start with a strike deep into injury time to beat Slovakia 1-0.

Allardyce had looked as though he would have to settle for a deeply uninspiring stalemate in Trnava -- the hosts having held firm in the World Cup Group F qualifier despite Martin Skrtel's sending-off after a nasty stamp on Harry Kane.

However Lallana picked a perfect moment to break his international duck and seal three points.

The Liverpool forward had already clattered the post when the ball broke for him inside the area, with seconds of the four added minutes left.

He showed neat footwork and got his shot away, then turned away in celebration as Matus Kozacik let the ball squirm between his legs and over the line.

The victory will be a huge tonic for Allardyce, and buys him a little extra time in his honeymoon period, but he will have seen plenty of familiar shortcomings. 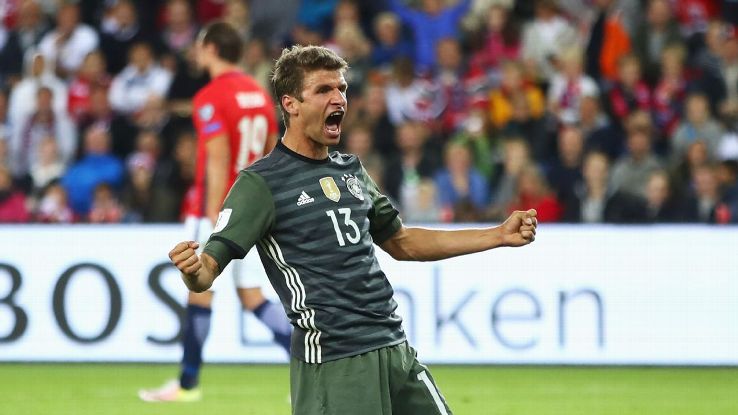 Thomas Muller helped Germany get off to a winning start.

Thomas Muller shook off his recent struggles in front of goal to open the scoring in the 15th minute against the Norwegians -- his sliding, left-footed shot from close range taking a deflection off goalkeeper Rune Jarstein before looping across the line.

Joshua Kimmich doubled Germany's tally just before the half with a well-struck hit across Jairstein after a fine set-up from Muller at the edge of the box.

Muller then rounded off the scoring with his second of the day -- the Bayern Munich star heading home Sami Khedira's inch-perfect cross on the hour mark.

The Hull City winger opened the scoring with a goal in the ninth minute only to see Alfred Effiong equalise just four minutes later.

Chris Martin gave Scotland the lead eight minutes after the break. Snodgrass then scored his second in the 61st minute, followed by a Steven Fletcher strike on 78 minutes and Snodgrass' third -- this time from the penalty spot -- six minutes from time.

Poland were forced to settle for a 2-2 draw after surrendering a two-goal lead to Kazakhstan in Group E.

A goal from Bartosz Kapustka and a Robert Lewandowski penalty had the visitors comfortably in front within the first 35 minutes.

However a seven-minute Sergei Khizhnichenko brace pegged Poland back and secured a valuable point for the home side.

Christian Eriksen gave Denmark a winning start to their Group E campaign with the lone goal in a 1-0 defeat of Armenia.

On 17 minutes, the Tottenham midfielder received a beautiful back-heel from Viktor Fischer at the top of the box before placing his left-footed shot out of the reach of Armenia goalkeeper Arsen Beglaryan.

Fedor Chernykh and Vykintas Slivka scored within two minutes of each other, but it wasn't enough as Lithuania held to a 2-2 draw against Slovenia.

Rene Krhin pulled a goal back for Slovenia in the 77th minute, and Bostjan Cesar completed the comeback in second-half stoppage time.

Ruslan Kurbanov's strike just before half-time handed Azerbaijan a 1-0 win against San Marino, who went a man down in the 52nd minute when Cristian Brolli was sent off for a crunching tackle on Ruslan Gurbanov.

In other qualifiers, the Czech Republic drew 0-0 with Northern Ireland, while Romania and Montenegro fought to a 1-1 stalemate in Cluj-Napoca.