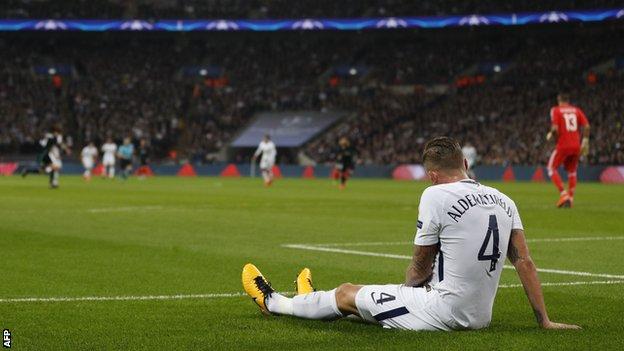 Alderweireld is being eased back from a hamstring injury he sustained in November and was not in the squad for Saturday's victory over Arsenal.

Juventus, second in Serie A, will be without Paulo Dybala, Juan Cuadrado, Andrea Barzagli and Blaise Matuidi.

Alderweireld, who is out of contract in the summer, played the full 90 minutes of Spurs' FA Cup replay win over Newport but has not played in the Premier League since the 1-0 defeat at Manchester United on 28 October.

"He had a massive injury and from day one we designed a plan to provide him with the best tools to recover as soon as possible and to be stronger than before," said manager Mauricio Pochettino.

"He has started to work with the team and it's our judgement that he needs to build his fitness."

The Serie A side have won their past 10 games in all competitions but must do without striker Dybala (hamstring). Matuidi's place in midfield is likely to be taken by Claudio Marchisio.

Juve boss Massimiliano Allegri said: "We know their strengths and we know that we will have to suffer for some parts of the game because Tottenham have four players with great quality in attack.

"We have achieved very good results in Europe. Only Real Madrid have done better in my opinion in recent years."