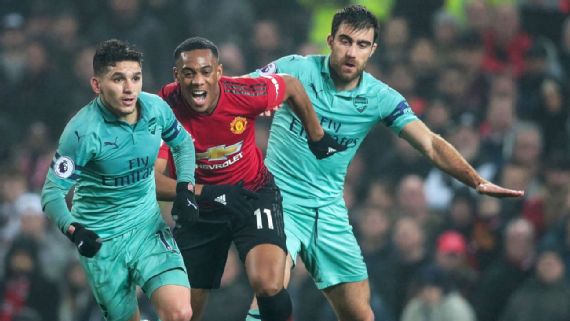 Manchester United twice came from behind in their 2-2 draw with Arsenal on Wednesday. John Peters/Man Utd/Getty Images

Manchester United remain distant spectators in a Premier League title race in which Liverpool continue to chase Manchester City but showed plenty of spirit as they twice equalised in a 2-2 draw with in-form Arsenal at Old Trafford on Wednesday.

Liverpool also fell behind but stormed back to beat Burnley 3-1 and cut the gap on leaders Manchester City to two points.

Tottenham Hotspur climbed to third with a 3-1 win over Southampton while Chelsea hung on to fourth spot, above Arsenal on goal difference, despite a 2-1 defeat at Wolverhampton Wanderers who ended a run of six games without a win.

Storm clouds have been gathering over Jose Mourinho's misfiring United side and on a wet night in the north west they again looked well short of being contenders for the top four.

It was the first United vs. Arsenal clash since 1986 not featuring either Alex Ferguson or Arsene Wenger in the dugout.

On this occasion it was Wenger's successor Unai Emery who would had more to be satisfied as his Arsenal side stretched their unbeaten run to 20 matches -- although United boss Mourinho also took comfort from a result that left his side 18 points behind leaders Manchester City.

"This is a performance of big soul and heart," Mourinho said. "But even from our bench you could feel the little panic when the ball comes to our defensive third."

Mourinho, who left Paul Pogba and Romelu Lukaku out of his starting lineup, said his side "scored all four goals."

He could not have expected keeper David De Gea to suffer the sort of panic that keeps undermining his side.

De Gea should have comfortably held Shkodran Mustafi's 26th-minute downward header but merely juggled it over his head and over the line.

Rojo forced Leno into a fine save but it was Arsenal who led again in the 68th minute when Alexandre Lacazette got the final touch but the advantage lasted less than a minute as Arsenal's defence allowed Jesse Lingard to steal in and slide a shot under Leno.

"I think we controlled the game, the second half better than the first," Emery said. "We could have won this match in certain moments, but they equalised very quickly after both our goals."

After Manchester City beat Watford on Tuesday to go five points clear, Liverpool responded well as their best start to a top-flight season continued after falling behind at Turf Moor.

James Milner levelled for the Reds after Jack Cork's surprise opener and substitute Roberto Firmino set Liverpool on course for a 12th win in 15 league games with his first touch before Xherdan Shaqiri rounded things off.

"I was really happy we could just adjust a few tactical things (at halftime)," Liverpool manager Jurgen Klopp said after his side's 12th in 15 games.

"I shouted a lot in the first half but I wasn't angry."

His only concern was a nasty-looking ankle injury sustained by Joe Gomez in the first half.

Tottenham Hotspur shook off their north London derby defeat by Arsenal with Harry Kane, Lucas Moura and Son Heung-min all on target for Mauricio Pochettino's side at Wembley where new Southampton manager Ralph Hasenhuttl watched from the stands.

Tottenham have 33 points, six behind Liverpool, and two more than Chelsea and Arsenal.

Chelsea took the lead early through Ruben Loftus-Cheek but Wolves replied with quickfire goals by Raul Jimenez and Diogo Jota as Chelsea lost for the second time in three games.

"We played very well for 55 minutes and then suddenly we were another team," Chelsea manager Maurizio Sarri said.

Fulham manager Claudio Ranieri welcomed his old club Leicester City to Craven Cottage and shared the spoils in a 1-1 draw while Everton were held 1-1 at home by Newcastle United.

Southampton, Burnley and Fulham occupy the three relegation spots with nine points each.