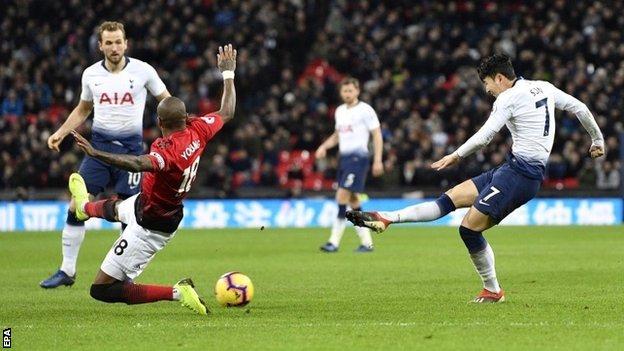 Tottenham are investigating an allegation of racism against winger Son Heung-min by a fan in the home end during Sunday's 1-0 loss to Manchester United at Wembley.

It is understood the club has spoken to the supporter who made the allegation on social media during the Premier League match.

Spurs will work with the fan and stadium safety officials to try to identify the person alleged to have abused the 26-year-old South Korea international.

"We are investigating an incident involving alleged racial abuse. Whilst the incident occurred in the home end, we are yet to determine if the alleged individual was a Tottenham Hotspur supporter or not," said a club spokesperson.

"Any kind of racist, discriminatory or anti-social behaviour will not be tolerated by the club. We have a strict, zero tolerance attitude in this regard and shall take action against anyone behaving or using language that is abusive, offensive or obscene."

Last month a Tottenham fan who threw a banana skin during the north London derby at Arsenal was banned from football for four years and fined.

A 23-year-old man is under police investigation after being arrested on suspicion of using anti-Semitic language before Tottenham's 1-0 win over Chelsea in the Carabao Cup semi-final first leg on 8 January.

He was one of three people arrested at Wembley on suspicion of a racially aggravated public order offence.