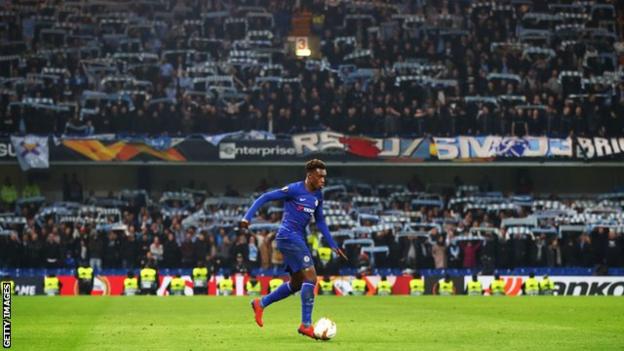 Callum Hudson-Odoi scored a marvellous second-half goal as Chelsea cruised into the Europa League last 16 with victory over Malmo at Stamford Bridge.

The Blues, who led 2-1 from the first leg, started slowly but improved markedly after the break.

Olivier Giroud gave them the lead on the night by tapping home, before Ross Barkley floated in a free-kick moments after Rasmus Bengtsson was sent off.

Hudson-Odoi, 18, then drove in from the right before firing in a late third.

Whether this result will ease the pressure on Blues manager Maurizio Sarri remains to be seen.

Their next two matches - against Manchester City in Sunday's Carabao Cup final, and Tottenham in the Premier League next week - will be bigger tests.

Given the quality of their performance, the scoreline perhaps flatters Chelsea; until the first goal it seemed their 'Sarri-ball' tactics - possession-based and methodical - would again be let down by a lack of end product.

Malmo had defended well. Their high line put the Blues defence and Mateo Kovacic - filling in for Jorginho in the deep playmaker position - under severe pressure early in the first half.

Sarri's Blues then did what they have done so often this season - dominate possession - but visiting keeper Johan Dahlin did not have to extend himself before half-time.

But errors began to creep into Malmo's performance after the break - and the first resulted in Chelsea's opening goal. N'Golo Kante pounced on Lasse Nielsen's loose header, drove towards the area and spread the ball wide to Willian. The Brazilian picked out Giroud in the six-yard area and he slotted home his sixth goal in Chelsea's past five Europa League games.

The Blues doubled their lead seconds after Bengtsson was shown a second yellow for a foul on Emerson. Barkley, who also scored in the first leg, delivered a pinpoint finish which left Dahlin rooted to the spot.

The third came with six minutes remaining - Hudson-Odoi collecting an excellent crossfield pass from Willian, driving into the box and firing a low, angled shot beyond the Malmo keeper. 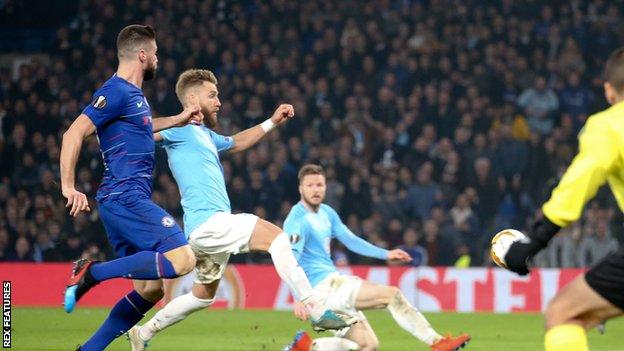 Did Hudson-Odoi do enough to start at Wembley?

With playmaker Eden Hazard on the bench, the responsibility for providing Chelsea's spark fell to Hudson-Odoi.

This was his first start since the FA Cup fourth-round game against Nottingham Forest at the start of January, and his selection was greeted with one of the biggest cheers of the night.

The teenager did not disappoint the home support. During a turgid first half, he lifted the gloom when, tight on the touchline, he wriggled past four defenders.

His late goal was well-taken and deserved. Many Chelsea fans will be hoping the academy graduate has done enough to earn a place in Sunday's team.