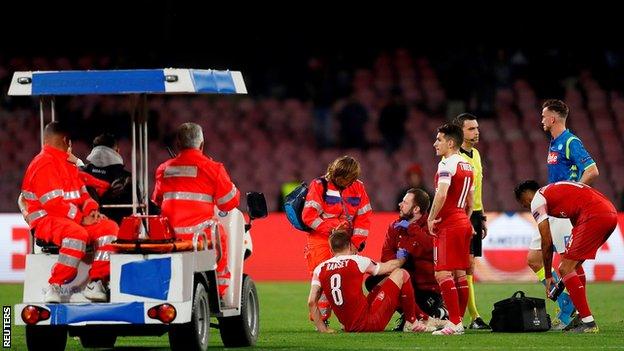 Wales international Aaron Ramsey will leave Arsenal after 11 years to join Juventus on a £200,000-a-week contract

Aaron Ramsey may have played his last game for Arsenal after suffering a muscular injury during their Europa League quarter-final against Napoli.

The midfielder pulled up feeling the back of his thigh in the 33rd minute and was replaced by Henrikh Mkhitaryan.

Ramsey, 28, will join Juventus as a free agent this summer, ending his 11-year spell with Arsenal.

"It is a muscular injury. Normally it will be some weeks out for him," said Gunners boss Unai Emery.

The typical recovery time for a minor hamstring injury is four to six weeks.