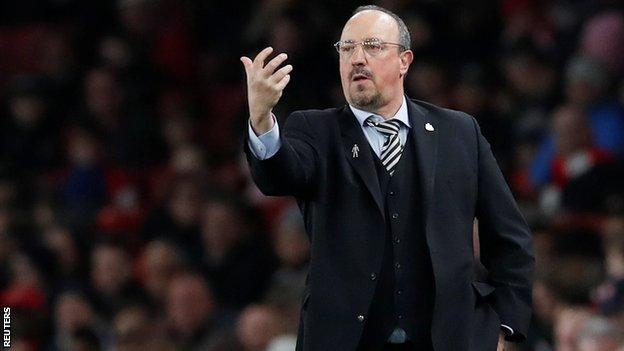 Newcastle boss Rafael Benitez says he wants to be a manager until he is 70, and have another chance to win the Champions League before he retires.

The 59-year-old, who is out of contract at Newcastle this summer, says he is "waiting for an answer" on a new deal.

Spaniard Benitez won the Champions League with Liverpool in 2005, and led Valencia to two La Liga titles and the Uefa Cup.

"I like to - and I want to - compete for trophies," said Benitez.

Benitez, who has also managed Real Madrid, Inter Milan and Chelsea, joined Newcastle in March 2016, but could not prevent them from dropping down to the Championship.

However, he led Newcastle to promotion the following season and helped them finish 10th in 2017-18 - their joint-highest finish since the 2011-12 season.

Asked how long he planned to carry on, Benitez said: "Yesterday I was talking with a friend - 11 years. Eleven years as a manager, that's fine. You can see Roy Hodgson is still there.

"I like to manage teams, I like to coach players, so I'm happy with that. Always I say, we are forward thinking. My staff, they are young people and we are always thinking about how to improve things."