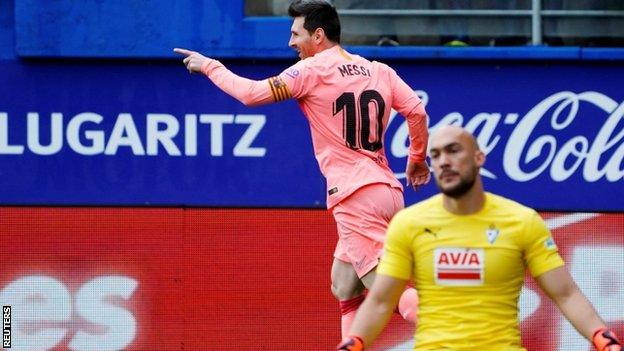 Lionel Messi scored two goals in two minutes but champions Barcelona had to settle for a draw against an impressive Eibar side in the final La Liga match of the season.

Messi fired in the equaliser from a tight angle before he clipped his second past Marco Dmitrovic.

Pablo de Blasis equalised just before the break with a superb 20-yard strike.

The Argentine was as impressive as his compatriot Messi in an entertaining conclusion to the 2018-19 campaign.

Aside from the two goals, Barcelona rarely troubled Eibar's keeper, although Messi should have tested the Serb with a late effort from 15 yards that sailed over the bar.

Dutchman Cillessen had a busier time at the other end and did well to block shots from Charles and Sergi Enrich.

Cucurella also had a golden opportunity to score his second late in the game, but he blazed over from only six yards out.

Barcelona - who finished on 87 points, 11 more than second-placed Atletico Madrid - will now prepare for next Saturday's Copa del Rey final against Valencia in Seville.