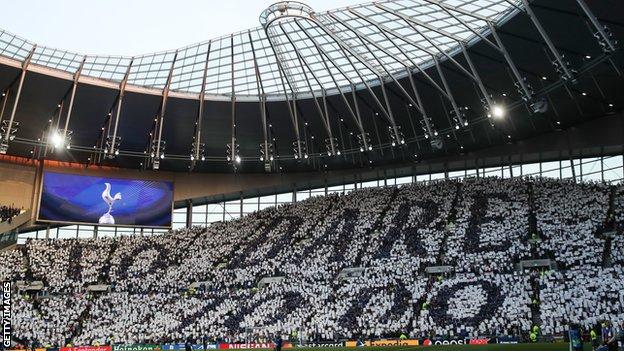 Tottenham have handed out "indefinite bans" to three season ticket-holders who listed their Champions League final tickets on a resale website.

Spurs face Liverpool in Madrid on 1 June, with each team receiving 17,000 tickets at the 63,500-capacity stadium.

Since 1994 it has been illegal for an unauthorised person to sell on tickets.

Liverpool are also investigating five fans who have listed their tickets for the final for sale on secondary ticketing platforms.

The Reds said they could be banned from Anfield for life.

Spurs asked fans not to "ruin one of the biggest occasions in the club's history by selling on your ticket and profiteering from fellow fans".

The Premier League club also said they would cancel match tickets if they were found to have been sold on by supporters after collection.

"Once again, we wish to remind all our supporters that any ticket purchased is for the sole use of the individual that purchases it from the club," read a statement.

"Transferring or selling tickets on unofficially breaches our terms and conditions and is against the law."

The BBC reported last week that tickets had appeared on resale website Stubhub priced from 3,450 Euros (£3,012).

Liverpool and Tottenham supporters' groups have called on Champions League sponsors to return tickets so more fans can attend the final.

Spirit of Shankly and Tottenham Hotspur Supporters' Trust said their ticket allocations will mean many fans miss out on attending the match.

While the Premier League clubs received 33,286 tickets, 4,000 were sold to fans worldwide and the rest have gone to the local organising committee, Uefa, national associations, commercial partners, broadcasters and to corporate hospitality packages.