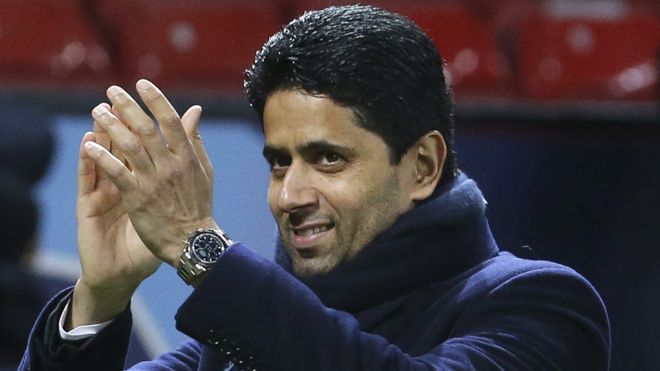 A French judge has charged the president of Paris Saint-Germain (PSG) football club, Nasser Al-Khelaifi, with corruption over Qatari bids to host the world athletics championships.

Judicial sources quoted by AFP news agency said the case focused on the championships held in 2017 and 2019.

Mr Khelaifi, who is also the boss of Qatari TV channel BeIn Sports, has been under investigation since March.

It is alleged that the payments were made by Oryx Qatar Sports Investment - a firm jointly owned by Nasser Al-Khelaifi and his brother Khalid - to a firm run by the son of Lamine Diack, ex-president of the IAAF, the world athletics governing body.

Lamine Diack, 85, was charged with corruption in March in relation to the case, while an arrest warrant has been issued for his Senegal-based son, Papa Massata Diack. Lamine Diack was IAAF chief in 1999-2015.

The French term "mis en examen" - meaning "charged" in English - does not automatically trigger a trial, but means that prosecutors strongly suspect wrongdoing.

In a statement Al Khelaifi's lawyers said the allegations were "inaccurate" and that he "had not validated any payment of any kind whatsoever" in relation to the allegations.

Another BeIn Sports executive, Yousef Al-Obaidly, is also under investigation in France over the awarding of the 2017 championships. He is a PSG board member.

Mr Obaidly, quoted by his lawyer, called the allegations "utterly baseless and unsubstantiated" and said he would contest them.

In January, Mr Al-Khelaifi was elected to the executive committee of European football's governing body Uefa. Uefa told the BBC it is "monitoring the situation".

In a statement, the IAAF said: "We continue to be available to the French prosecutor to share any information that may assist the investigation.

"However, we have not seen the specific indictments referred to by the media. The dates published in the media appear to coincide with the bidding timetable for the 2017 IAAF World Championships which were awarded to London.

"The 2019 World Championships bid process began in February 2014 with a decision in November 2014. Our rights holder for the region was, and still is, Abu Dhabi Media, who signed as a partner in January 2014."

A lawyer for Mr Khelaifi denied any wrongdoing on the part of his client, saying the Oryx payments were fully transparent.

"Nasser Al-Khelaifi was neither a shareholder, nor a director of Oryx in 2011. He did not intervene either directly or indirectly in the candidature of Doha," he said.

PSG won the French Ligue 1 championship this season, but were knocked out of the Champions League by Manchester United.