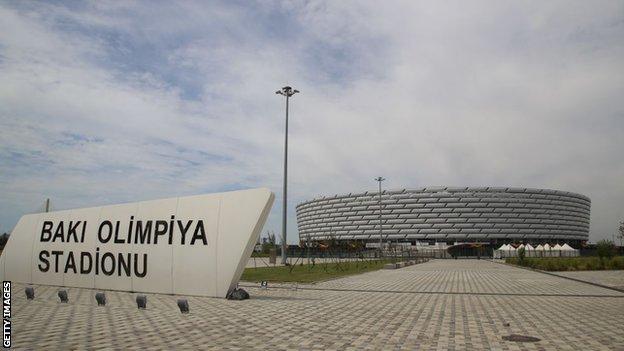 The Europa League final will be held at Baku's Olympic Stadium

Chelsea Supporters Trust has criticised the club for the lack of help for fans trying to get to their Europa League final with Arsenal in Baku on 29 May.

Uefa's choice of the Azerbaijani capital has been widely questioned over its apparent inaccessibility.

Arsenal have sold just over half of their 3,000 ticket allocation.

"We're disappointed Chelsea have been unable or unwilling to help supporters overcome the travel, expense and logistics," the trust said.

"This is in spite of the trust's suggestions as to how the club could offer material help to supporters wishing to go to Baku."

The trust criticised Chelsea for failing to offer a subsidy to supporters in light of the "extortionate" costs involved, and for insisting on tickets being picked up at a specific location.

A trust statement added: "We suggested providing a subsidy for travelling supporters, having calculated the negligible financial impact on the club given the revenue earned from the competition this season."