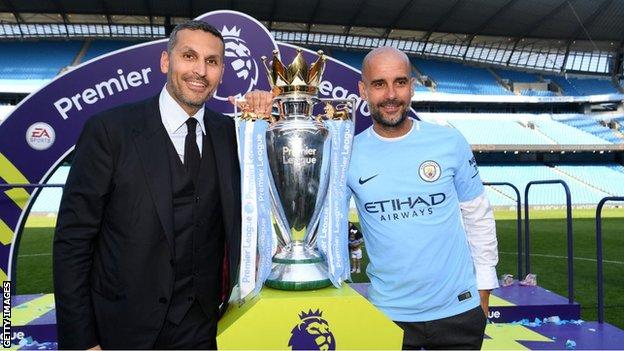 Manchester City chairman Khaldoon Al Mubarak says some of their rivals are jealous of the club's success.

City became the first English side to win a domestic treble when they beat Watford 6-0 in the FA Cup final, yet the achievement has been accompanied by criticism of the amount it has cost to put Pep Guardiola's squad together.

However, in his annual assessment of the campaign on City's internal media, Mubarak said he will not accept "being used as a diversionary tactic on poor investment decisions".

Premier League champions City do not have a player in the top 10 most expensive signings. English rivals Manchester United have two - £89m Paul Pogba and Romelu Lukaku, bought for an initial £75m - and Liverpool one in £75m Virgil van Dijk.

City's record signing is Riyad Mahrez, who they bought from Leicester for £60m in July 2018, while their other biggest transfers include Aymeric Laporte for £57m, Kevin de Bruyne for £55m and Benjamin Mendy for £52m.

"With success, there is a certain level of jealousy, envy, whatever you call it. That's part of the game," said Mubarak.

"People make decisions, they've got to live by them. This is a well-run club."

Criticism of City has intensified since it was confirmed they had been referred to Uefa's financial body amid allegations of financial fair play (FFP) rule breaches something the club strenuously denies.

'Playthings of a state' rebuttal

Mubarak is particularly upset at comments from La Liga president Javier Tebas, who said recently that City, backed by the Abu Dhabi United Group, and Paris St-Germain, owned by Qatar Sports Investments, were the "playthings of a state" who should be kicked out of the Champions League over their methods and spending powers.

"I think there's something deeply wrong in bringing ethnicity into the conversation," Mubarak said of the comments.

"This is just ugly, the way he is combining teams because of ethnicity. I find that very disturbing, to be honest."

City feel Tebas' comments do not bear scrutiny when it is considered how much Spanish giants Real Madrid spent during their 'galactico' era, when they signed Portugal forward Luis Figo, France midfielder Zinedine Zidane, Brazil striker Ronaldo and England captain David Beckham in successive summers from 2000.

"He [Tebas] talks about how we distorted the market," Mubarak added.

"There is a hypocrisy in this statement that is ironic. These huge jumps in these transfers - Figo, Zidane - where did they happen?

"I have no time for innuendo. Mr Tebas should look back at the history of La Liga, a league dominated by two clubs, and how distortion has happened. Manchester City has not a single player in the top 10 transfers.

"There are four Premier League teams in the two European finals. We have the best league in the world, the most commercial league and the most successful clubs in terms of global presence. That bothers a lot of people in many places." 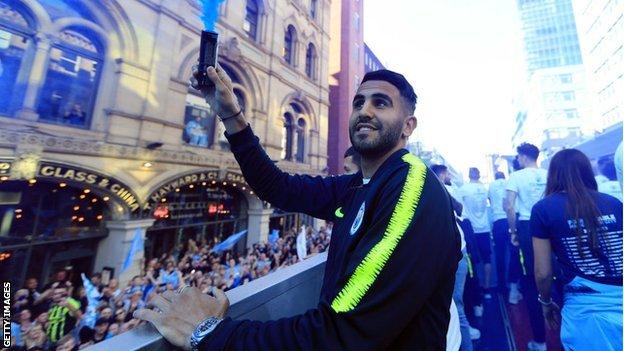 Manchester City's record signing is Riyad Mahrez, who they bought from Leicester for £60m

On 14 May, City said they were "concerned" at an article published in the New York Times claiming Uefa investigators wanted the club banned from the Champions League, saying they feared people with vested interests were intent on "damaging the club's reputation or commercial interests".

On Sunday, Mubarak restated his belief City will "unquestionably" be cleared "if the process is going to be judged on the facts".

However, he added: "If it's not about facts, then it is a different conversation."