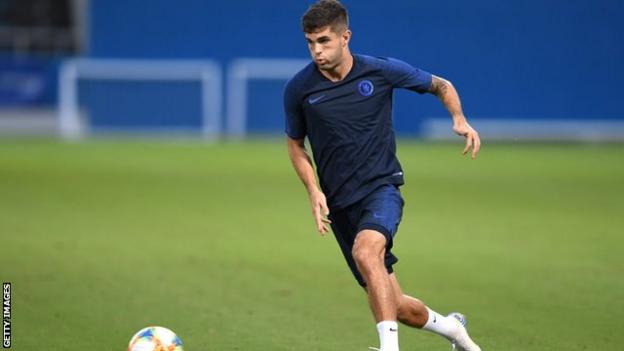 New signing Christian Pulisic made his Chelsea debut in a friendly defeat to Japanese champions Kawasaki Frontale in Yokohama.

A late header from Leandro Damiao gave the hosts a 1-0 victory as Chelsea struggled in humid conditions.

Pulisic, who replaced Mason Mount in the second half, failed to make an impression before Damiao nodded in from close range in the 88th minute.

Chelsea have won just one of their three pre-season friendlies.

It was a frustrating afternoon for them at the Nissan Stadium as Pedro, Mount and Olivier Giroud all came close in a game of few clear-cut chances.

The 20-year-old's curling effort flew inches wide in the second half. And he had a shot deflected behind following some neat link-up play with Michy Batshuayi before the break.

Chelsea first-teamers Pedro and Cesar Azpilicueta linked up well down the right.

That meant Brazilian winger Kenedy had few opportunities on the opposite flank, barely getting involved until the second half, when Ross Barkley played him in twice.

Striker Giroud, on as a second-half substitute, came close with a powerful free-kick in the 75th-minute after Pedro's long-range strike had flown inches over the bar in the first half.

They were Chelsea's best chances and goalkeeper Willy Caballero had relatively little to do despite denying Akihiro Ienaga on the stroke of half-time.

The Blues missed N'Golo Kante in midfield - the Frenchman is continuing his recovery from injury - while Tammy Abraham and Kepa Arrizabalaga were also absent.

But it was a useful 45-minute spell from Batshuayi in attack, and for centre-back Kurt Zouma, who started in defence alongside David Luiz.