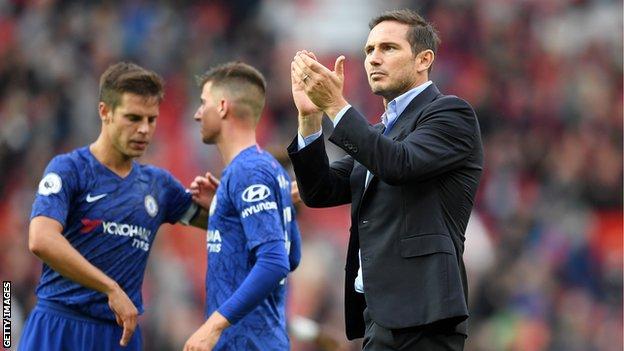 Chelsea manager Frank Lampard has "one hell of a job on" this season, says former striker Chris Sutton.

The Blues lost 4-0 to Manchester United at Old Trafford on Sunday in Lampard's first Premier League game in charge.

Eden Hazard left Stamford Bridge to join Real Madrid in June, while Chelsea are banned from signing new players until next summer.

"It's like going into an Olympic rowing final and being asked to compete in a dinghy," said Sutton.

"And you've lost your Steve Redgrave."

Former England midfielder Lampard, 41, left Championship side Derby in July to take over at the club where he spent 13 years as a player.

He signed a three-year deal to succeed Maurizio Sarri, who left to join Juventus after winning the Europa League and finishing third in the Premier League in his sole season in charge.

Chelsea were given a two-window transfer ban by world governing body Fifa in February after an investigation into their signing of foreign under-18 players, which they are appealing to the Court of Arbitration for Sport.

"Frank Lampard has one hell of a job on after the club lost their best player," Sutton told BBC Radio 5 Live's Monday Night Club.

"Hazard carried them for years but he's gone and they can't bring players in.

"It all comes down to what the owner's expectation is and what Lampard has been told at the start of the season. The fans being behind Lampard will only last for so long."

Since Russian billionaire Roman Abramovich bought the club in 2003, Chelsea have won five Premier League titles and only finished outside the top six once, coming 10th in the 2015-16 season when Jose Mourinho was sacked.

The Blues have had 10 different permanent managers, including two separate spells by Mourinho, in the Abramovich era.

"This is the first season under Abramovich that I don't think anybody gives them a chance of winning the title," added Sutton.

"The obvious thing is Lampard needs time but this is an owner who hasn't given his managers time - if Chelsea finish eighth or ninth or 10th, Lampard won't be there next season." 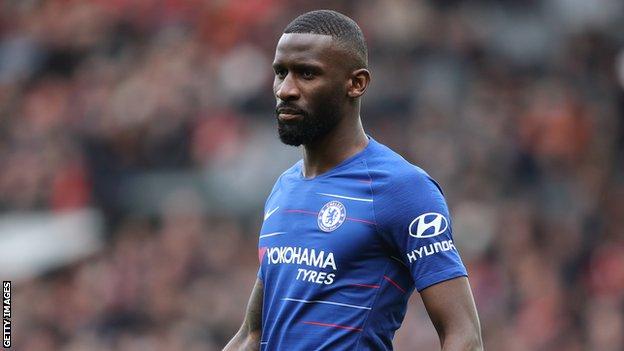 "It's the first game and we know Lampard is hampered," said former Arsenal striker Ian Wright.

"He knows there is a lot of work to be done but once you get Rudiger back, he will give them some steel, Kante will steady them and James will make a difference."

Wright added Chelsea's "biggest issue" will be scoring enough goals to stay up near the top of the table.

"Tammy Abraham was very unlucky in hitting the post, it was a great strike and goals change games - if Chelsea had scored early on, it might have been different," he said.

"There is some naivety in Abraham's play, he has to learn how to hold it up so people can come and support and he can then turn and get into the box and he's going to have learn quickly.

"But we can't start judging until the likes of Rudiger and Kante are back and they are hoping Christian Pulisic will kick in.

"The owner said he wants Lampard there and I believe he is going to be successful because he will get time and, with Jody Morris as his assistant and Petr Cech as technical and performance adviser, they are getting Chelsea people in and they are going to do it together.

"Hopefully the kids can hit the ground running for when they can sign players again because Lampard needs that to happen and if it does we are talking about a whole different scenario and it's not a million miles away."