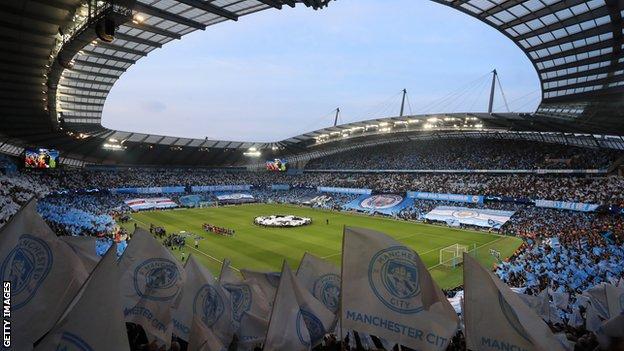 City have been fined £315,000 by Fifa for breaches of article 19 on international transfers of under-18s

Fifa said City breached article 19 of its regulations: "International transfers of players are only permitted if the player is over the age of 18."

City say the breaches, which all occurred before December 2016, were as a result of "misinterpretation of the regulations in question".

Chelsea were banned from signing players for two transfer windows for a similar rule breach - but the club are appealing to have that overturned.

City said the rule breach was in relation to players on trial and their participation in friendly games, and that the club had been "fully compliant" since. The club also said they "co-operated fully" with Fifa's investigation.

"The club accepts responsibility for the breaches which arose as a result of misinterpretation of the regulations in question," said City.

"The Fifa disciplinary committee has sanctioned English club Manchester City FC for breaches relating to the international transfer and registration of players under the age of 18," said football's world governing body in a statement.

"Manchester City FC was found to have breached, among others, article 19 of the Fifa Regulations on the status and transfer of players.

"The disciplinary committee took into account the fact that Manchester City FC accepted its responsibility and sanctioned the club with a fine of CHF 370,000."

Chelsea were sanctioned by Fifa in February for breaching rules in relation to 29 youth players, and were fined £460,000 in addition to their transfer ban.

In June the Blues, who were not allowed to make any signings in the summer transfer window, announced they were taking their appeal to the Court of Arbitration for Sport, having failed with their first appeal to Fifa.

In May 2017, City were banned from signing academy players for two years and fined £300,000 after breaching Premier League transfer rules.

The club are currently being investigated by Uefa for alleged financial fair play violations.

What are Fifa's rules?

Fifa bans the international transfer of under-18s unless they meet strict criteria. It brought in the rules to help protect children from exploitation and trafficking.

Under-18s can only be transferred abroad if: