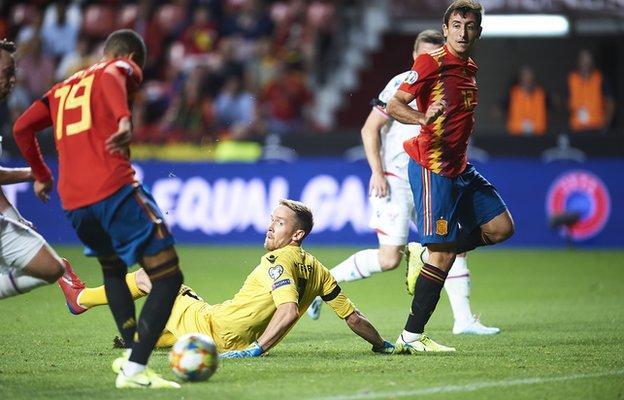 Spain moved closer to reaching Euro 2020 with a comfortable qualifying win over the Faroe Islands in Group F.

Robert Moreno's side are top having won all six of their games and are seven points clear of Sweden in second place.

The Swedes were held to a 1-1 draw by Norway - Emil Forsberg cancelling out Stefan Johansen's opener.

Valencia's Rodrigo scored twice for Spain, tapping home before curling in a deflected effort in the second half, and Paco Alcacer added two late on.

Borussia Dortmund striker Alcacer poked in from close range on 89 minutes and headed in at the near post in injury-time.

Spain dominated the match with 71% possession and could have had further goals but Real Madrid defender Sergio Ramos - winning a record-equalling 167th cap to draw alongside goalkeeping legend Iker Casillas - hooked a shot over from a corner.

And former Liverpool midfielder Suso curled a shot narrowly wide before Bayern Munich's Thiago almost scored in spectacular fashion with a 25-yard volley which was well kept out by Faroes goalkeeper Gunnar Nielsen.

In the same group, Reading striker George Puscas scored the winner as Romania edged past Malta 1-0 to move up to third place. 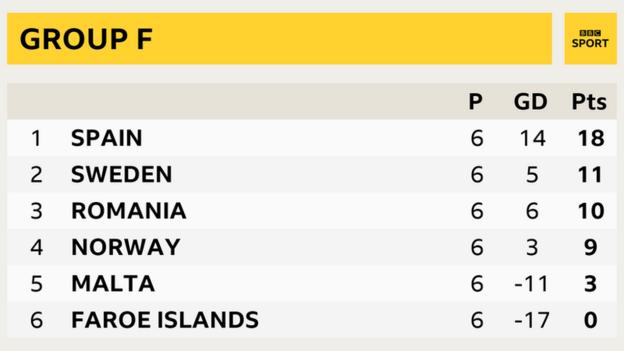