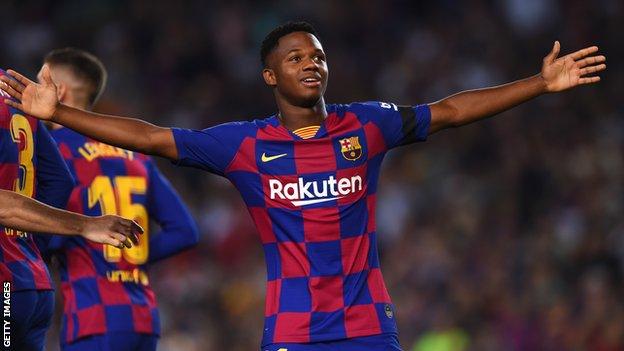 Barcelona's teenage forward Ansu Fati has been granted Spanish citizenship paving the way for him to play for them at international level.

The 16-year-old is also eligible to play for Guinea-Bissau, where he was born and reportedly for Portugal through his grandparents.

Fati's application for Spanish citizenship was processed by the country's Interior Ministry after he completed the required 10 years of residency.

It means that he could be included in Spain's squad for the Under-17 World Cup, ahead of next week's deadline.

Even if he plays for Spain at under-17 level Fifa's statutes mean that Fati could still swap allegiances at senior level.

On Tuesday he became Barcelona's youngest-ever Champions League debutant as he after started the 0-0 draw at Borussia Dortmund.

He has already scored two goals this season in his three La Liga appearances.