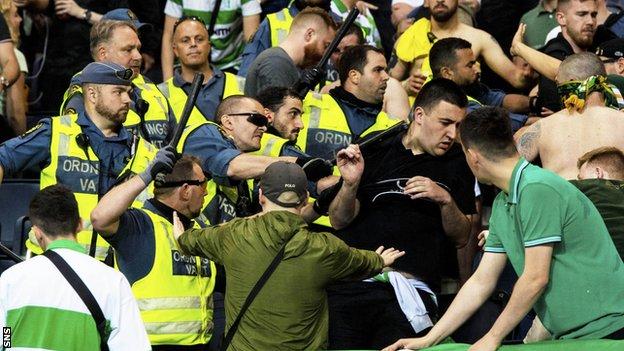 Celtic have been fined £11,000 by Uefa for fans setting off flares and throwing objects during the 4-1 Europa League play-off second-leg win over AIK in Stockholm last month.

Uefa's control, ethics and disciplinary body met on Thursday to rule on the charges against the Scottish champions.

Celtic claimed Swedish supporters had infiltrated the away end as fans and police clashed at the Friends Arena.

AIK have been fined £7,000 for stairways being blocked.

Celtic won the tie 6-1 on aggregate to reach the group stage, which they began with a 1-1 draw away to Rennes on Thursday.

The latest charge is the 17th time Celtic have been fined by European football's governing body since 2007.

The previous punishment came two years ago when they were docked £8,900 after a fan ran on to the pitch and tried to kick Paris St-Germain striker Kylian Mbappe during the French champions' 5-0 win at Celtic Park.

Celtic's fine is the third time Scottish clubs have been charged by Uefa this season. Rangers have had a section of Ibrox closed for their last two Europa League home games after being found guilty of "racist behaviour" by their supporters in games at St Joseph's and Legia Warsaw.