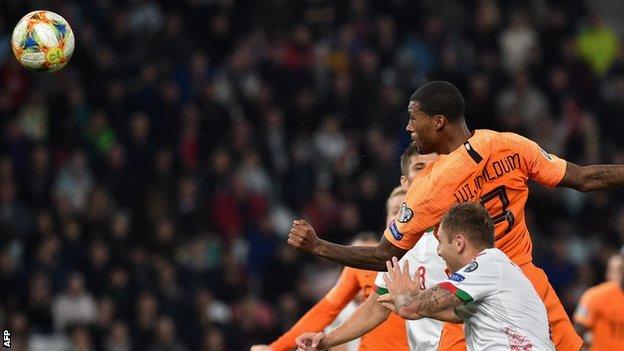 Georginio Wijnaldum has scored 15 goals for the Netherlands

The Netherlands and Germany both earned vital Euro 2020 away wins on Sunday to damage Northern Ireland's hopes of reaching the next summer's finals.

Liverpool midfielder Georginio Wijnaldum scored twice in the first half as the Dutch beat Belarus 2-1.

Northern Ireland remain third in Group C, three points behind both of their illustrious rivals.

Michael O'Neill's side host the Dutch and travel to Germany in their final two games next month.

The Dutch edged closer to qualification after Wijnaldum opened the scoring with a header from six yards before doubling his tally with a 22-yard drive into the top-right corner.

Stanislav Dragun pulled one back for the home side but Ronald Koeman's side hung on.

Later, Germany moved back alongside them on 15 points with a hard-fought win in Tallinn.

After a goalless first half which saw Emre Can sent off for a professional foul, Germany took control after the break with a pair of deflected strikes from Gundogan in the space of six minutes.

Substitute Timo Werner wrapped up victory with a cool finish after being picked out by Gundogan. 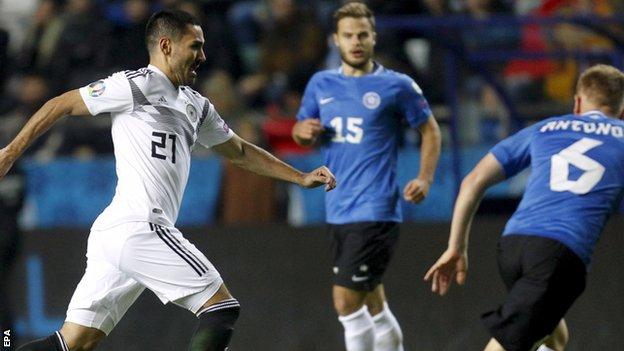 Ilkay Gundogan scores for Germany in Estonia; Manchester City midfielder Ilkay Gundogan was instrumental in a crucial win for the three-time European champions