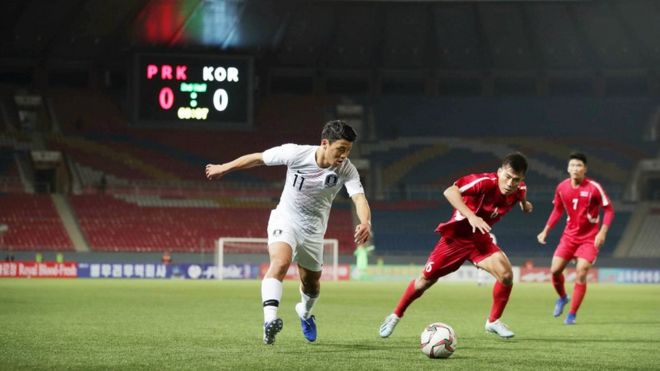 The game was played with no spectators and no journalists allowed

South Korea's football team has described their recent match with North Korea as "like a war", after arriving back in the South.

The qualifier for the 2022 World Cup took place in the North's capital Pyongyang on Tuesday in a stadium with no fans from either country.

The match - which finished 0-0 - was only the second time South Korea's men's team had played in Pyongyang.

The two countries are technically still at war and relations are at a low ebb.

"It [the match] was like war," said the Korea Football Association vice-president Choi Young-il as the team arrived back at Incheon airport on Thursday.

"North Koreans wouldn't even make eye contact when I talked to them, not to mention respond," he added.

The captain of the South Korean squad - Tottenham's Son Heung-min - was also surprised by the North's rough tactics.

"The match was very aggressive to a degree that I think it's a huge achievement just to return safely without being injured," he said.

"North Korean players were sensitive and aggressive...there was a lot of severe swearing [from them]."

According to Fifa's official report, there were two yellow cards for either side.

A video from the Swedish ambassador to North Korea, Joachim Bergstrom - one of the few spectators - appeared to show a confrontation during the match.

Among the handful of spectators was Fifa President Gianni Infantino, who said he was "disappointed" and "surprised" by the absence of fans.

No foreign media were allowed and the game was not broadcast live.

The official Korean Central News Agency summed up the match briefly: "The game of attacks and counter-attacks ended in a draw," it said.

While the South was not allowed to bring fans, it was unknown before kick-off whether the North's spectators would be present.

Football is popular in the North, but when the teams took to the pitch, the huge stadium was empty.

"We expected 50,000 people to come pouring in once the door opened but they didn't come," said Choi Young-il.

With no live broadcast or foreign media allowed, the North handed a DVD of the match to the South, so it can eventually be shown on South Korean TV.

However, the footage is apparently not good enough quality to be broadcast.

Although matches between the Koreas are not uncommon, most games were held either in the South, or in a third country.

For example, in the 2010 World Cup qualifiers, both the North's home games against the South were played in Shanghai, China.

The two countries are technically still at war - the Korean War ended in 1953 with an armistice, but a peace treaty was never signed - and the North would not allow the South's anthem or flag in its stadium. 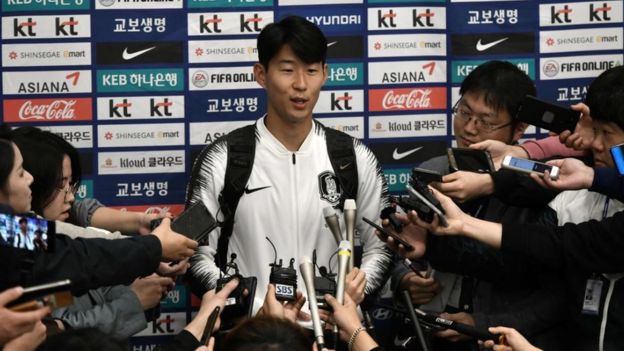 Sport, though, has often been a key to unlocking fresh diplomacy on the peninsula.

The 2018 thaw came about when North Korea's Kim Jong-un floated the idea of his country taking part in the Winter Olympics in the South.

Months later, the two teams marched under a common flag and even fielded a joint women's ice hockey team.

Then, at the Asian Games, a unified Korea boating team won a historic gold medal.

"If you ask politicians, including President Moon Jae-in, he's obviously pushing to have the two Koreas submit a joint-bid to co-host the Olympics in the far future," Mr Han said.

"For average South Koreans, though, this is an old story.

"There have been plenty of times when the athletes from the two countries marched together during the opening ceremonies of the Olympics and Asian Games, whilst flying the Korean unification flag.

"By now, most South Koreans realise that these things have more or less become PR stunts by politicians rather than sports acting as a bridge between the two countries." 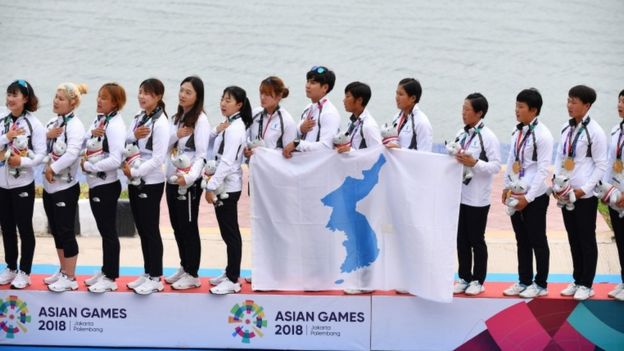 Tuesday's match came at a time when relations between Seoul and Pyongyang were at a low-point.

The North is upset that South Korea continues to carry out low-level military exercises with the US, and earlier this summer rejected all further talks with Seoul.

Meanwhile, Kim Jong-un's denuclearisation talks with the US have hit a roadblock, and relations with the South tend to ebb and flow alongside such talks.