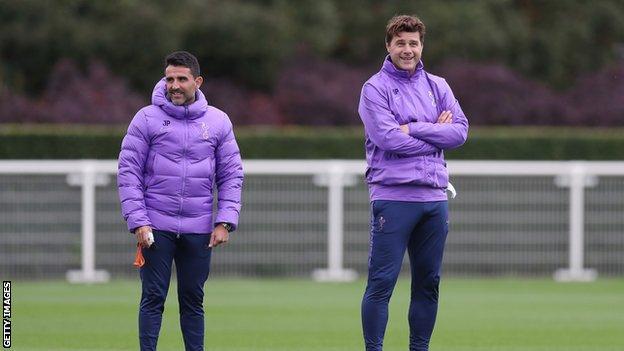 Tottenham boss Mauricio Pochettino is convinced his squad are still behind him because he has been invited to a team dinner by one of his players.

Pochettino's position is under scrutiny after a run of three wins from 11 games in all competitions so far this season.

However, the Argentine says his invitation to dinner via text message proves the team are still united.

Speaking at a news conference before Saturday's Premier League match at home to Watford, Pochettino said: "When you receive a text from the player inviting you and the coaching staff for a dinner only two things can happen.

Spurs lost 3-0 at Brighton in their last Premier League match before the international break, just four days after a 7-2 thrashing by Bayern Munich in the Champions League.

The north London club were also beaten on penalties by League Two Colchester in the Carabao Cup earlier this month.

That poor run of results led to speculation Pochettino could use the January transfer window to try and turn things around.

Pochettino has dismissed that suggestion, however, and says January would be too late to try instigate a change in form anyway.

"I never was keen on January and I will not change now because it is a tough period or tough few games, I'm not going to change the way I think or see things," he added.

"We are not going to force anything because we believe the squad is a decent squad. Now we need to be strong our decision was right, because we are suffering a storm now we cannot now change quick.

"Now it's the time to be responsible. First me and then the players, everyone.

"Now is not a point to talk about January, refreshing the team. Now is about trying to find solutions because we need to win tomorrow and we need to win after tomorrow.

"We need solutions now. We cannot think, 'OK, we forget now and in January we are going to fix the problem'. It's not like this."