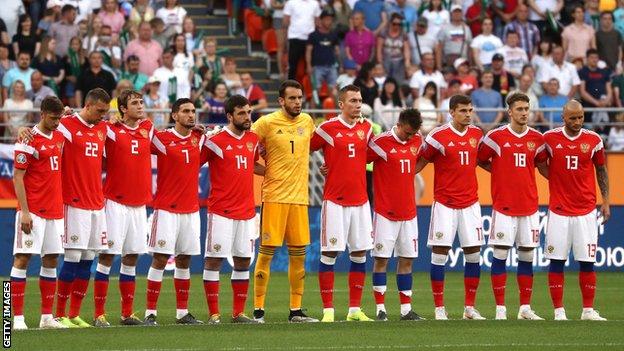 Russia have been banned from all major sporting events for four years - a period of time which includes the 2022 World Cup.

But yet a team of Russians could still play at the tournament in Qatar if they qualify.

Russia, who hosted the 2018 World Cup, have been banned by the World Anti-Doping Agency (Wada).

Under the terms of the ban, barring an appeal, the Russia flag and anthem will not be allowed at any major events in the four-year period.

But athletes who can prove they are untainted by the doping scandal will be able to compete under a neutral flag.

So they can compete as a neutral team in Qatar?

Yes, as it stands.

"But if there is a mechanism put in place, then they can apply to participate on a neutral basis, not as representatives of Russia.

"It will be for Fifa to implement, but they will have to do so in conjunction with Wada. But there will be no flag or anthem."

A Fifa spokesperson said football's world governing body was in contact with Wada to "clarify the extent of the decision in regards to football".

This has happened before - a team of Russian athletes competed under a neutral flag at the 2018 Winter Olympics in Pyeongchang.

The 2022 World Cup takes place from 21 November to 18 December, with European qualifying set to start in March 2021.

Despite their ban from the tournament, Russia can take part in qualifying.

The sanctions also prevent Russia from hosting events during the ban.

St Petersburg is a host city for group games and a quarter-final at next summer's European Championship (which is being hosted by several countries), as well as staging the Uefa Champions League final in 2021.

However, it will be allowed to fulfil those obligations as European football's governing body Uefa is not defined as a "major event organisation" with regards to rulings on anti-doping breaches.

That also allows Russia, who have already qualified for Euro 2020, to play at the tournament.