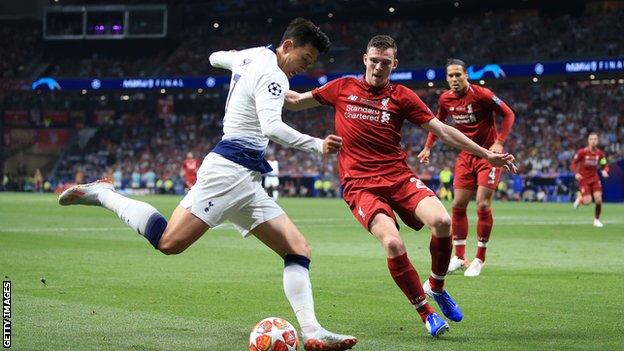 English clubs contested both of last season's two major European finals, with Tottenham against Liverpool in the Champions League

Sir Alex Ferguson has questioned why English teams would want to be part of a proposed global Super League.

In October, world governing body Fifa said it wanted to expand the Club World Cup to 24 sides for 2021, plans opposed by its European counterpart Uefa.

Fifa has also held private discussions about a global Super League, which would see clubs stop playing in their own domestic leagues to take part.

"I struggle to see why an English team would need to leave," Ferguson said.

According to the New York Times, Real Madrid president Florentino Perez has been involved in private talks with Fifa president Gianni Infantino and club chiefs over a global league.

It is understood these discussions are not widespread and there is no agreement.

Having read about the proposals, former Manchester United boss Ferguson, who won 38 trophies in 26 years at Old Trafford before retiring in 2013, does not understand how English clubs would view such a league favourably.

"Without question, it is money orientated, but surely this would not be attractive to our clubs in the Premier League, which at the moment is the best domestic league in world football and is well supported financially by Sky, BT and now Amazon," Ferguson told the BBC.

"Furthermore, the attraction of playing in the Champions League is huge for players, coaches and fans alike, as it remains the ultimate test in club football.

"A lot of clubs with great history could be lost if their partners in the Premier League upped sticks. I strongly believe this is a realistic appraisal of the value of domestic football."

Ferguson's intervention comes at a time of discussion around changes in the world and European games.

In addition to the Fifa plans, the European Clubs' Association (ECA) is continuing to consult widely about a restructuring of the Champions League from 2024.

The latest conversations are centring around a 32-team league in which each club plays 10 matches against 10 different opponents, with eight teams automatically qualifying for the knockout stages and another 16 going into the play-offs and a chance to join them.

No firm proposals are in place and sources close to the situation have said there is no rush to reach a conclusion given the organisation's next General Assembly is not until March 2020.

However, a senior source has told the BBC there is merit in the proposals and they could be used as a template that can be amended slightly to gain support from clubs and countries alike.

The ECA is trying to increase both the size and scope of what will be three European competitions by 2024 as many clubs outside the major leagues feel they do not get enough games.

Europe's five most high-profile domestic leagues - in England, Spain, Italy, France and Germany - are providing all 16 teams for the knockout stages of this season's Champions League; it is the first time that has happened in the competition's history.