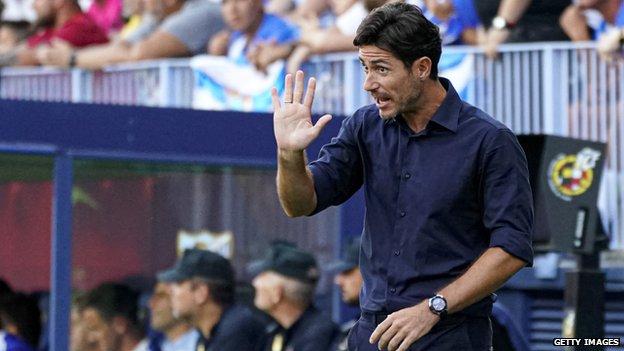 Spanish side Malaga have suspended head coach Victor Sanchez after an explicit video of the 43-year-old was posted on social media.

The second-tier side said an investigation had been launched.

Writing on Twitter, Sanchez said he had been blackmailed over the video prior to it being published.

"I am being subjected to a crime against my privacy with harassment and extortion," he said.

"The matter is in the hands of the police and I entrust myself to follow their instructions.

"Sharing or disseminating an intimate content of any person without consent is also a crime either through social networks or messages or in any other way. Thank you for your understanding and support."

Malaga are currently 16th in the Spanish Segunda Division.

"In relation to the events that have recently been discovered, and which have not as yet been verified, Malaga CF immediately suspends coach Víctor Sanchez del Amo from his duties until a full investigation is carried out," the club said in a statement.

"We will disclose further information once the facts have been clarified."

Later on Tuesday Malaga president Abdullah Al Thani, in an apparent reference to Sanchez, wrote on twitter: "Be strong and say I make a mistake."