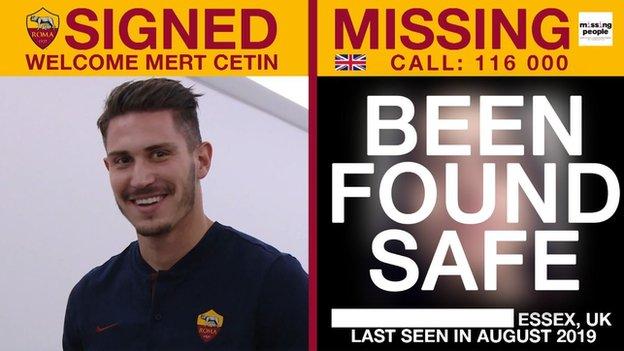 A British boy has become the sixth child to found as a result of Roma's missing children campaign, the Serie A club has said.

On Tuesday, the club said a 15-year-old from Essex, who featured in the post to announce the signing of Turkish defender Mert Cetin, had been found.

The boy had been missing since August but has been reunited with his family.

Cetin said he was "happy" to have played part a "some small way".

"As soon as I received the news that another missing child had been found, my heart filled with joy," he said.

"I'm sure it was a beautiful Christmas present for him and his family."

The teenager is the third British child to have been found as a result of the campaign.

A nine-year-old boy from Belgium and two children from Kenya have also been found.

Jo Youle - the chief executive of charity Missing People, who have Roma have partnered for the campaign - said: "It is fantastic news that another one of the young people who was part of the AS Roma transfer video appeal has been found.

"We are really thankful to our friends at AS Roma for sharing their transfer videos on social media earlier this year and also dedicating additional social media posts to try to help find the boys and girls.

"With the help of their millions of fans, it has raised awareness of missing children and young people to a wide audience."