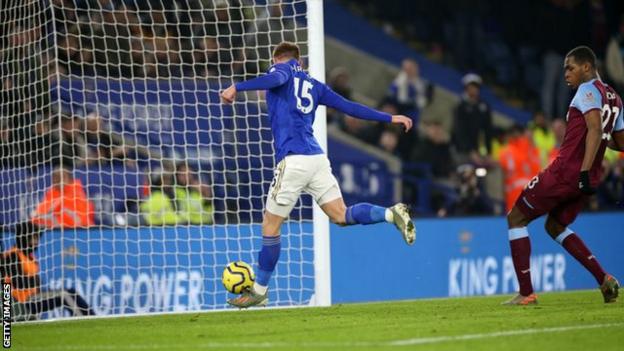 Leicester returned to winning ways against West Ham at King Power Stadium but lost the league's top scorer Jamie Vardy to injury in the first half.

Harvey Barnes scored the opener, poking in from a yard out, before turning provider for Ricardo Pereira on the stroke of half-time.

West Ham captain Mark Noble made it 2-1 from the spot before Leicester's Ayoze Perez did the same.

And Perez drilled in a fourth for Leicester with minutes to go.

There had been a lengthy stoppage time at the end of the first half as Vardy received treatment for what looked like a hamstring injury.

Less than 10 minutes before, Leicester midfielder Nampalys Mendy was substituted for an apparent knee injury and West Ham's Robert Snodgrass came off at half-time after a knock.

One in, two out as Foxes' injuries mount 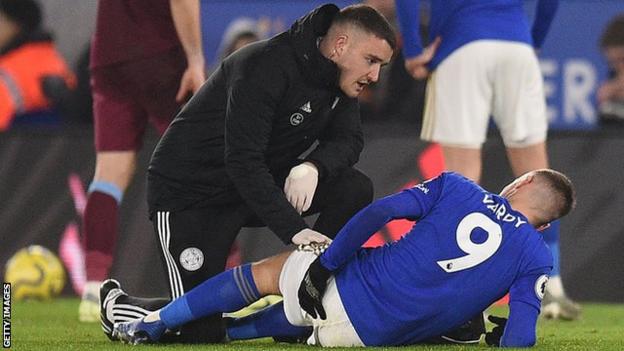 Leicester were boosted by the return of key midfielder Wilfred Ndidi, who was on the bench just 13 days after having minor knee surgery.

Manager Brendan Rodgers had said before kick-off that Ndidi was "there if we need him".

And in the end, Leicester did need him when Mendy went down with an apparent knee injury after 32 minutes.

Mendy had filled in for Ndidi in the 2-1 defeat by Burnley on Sunday, as well as playing 70 minutes in the same defensive role in December's victory over West Ham.

But Leicester's injury concerns got even worse when Premier League top scorer Vardy immediately clutched the back of his left leg after clearing the ball in his own defensive area.

Silence spread through the King Power as Vardy - who has scored 17 goals and picked up four assists this season - received treatment on the pitch before attempting to run it off.

He lasted barely two minutes when he returned and was eventually substituted for striker Kelechi Iheanacho.

Rodgers said after the game Vardy's injury was "not his hamstring, which is good".

The striker has contributed to 34% of Leicester's Premier League goals this season and Rodgers added he hoped it would "ease off over the next couple of days". 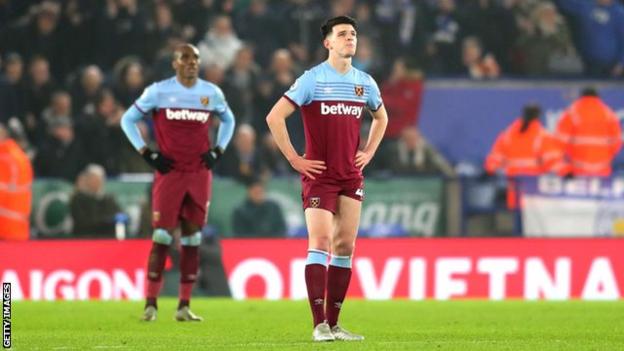 Leicester were cruising in the first half and came out the blocks firing.

They enjoyed 72% of possession and West Ham only managed 17 passes in the opening 10 minutes.

Vardy drew a save from Darren Randolph within minutes - finishing off a slick passing move from Leicester - and there were further chances for Pereira and Mendy before Barnes eventually got the opener on 24 minutes.

Pereira slotted the ball across the face of the goal and Barnes could not miss from a yard out, before the two combined again in stoppage time - giving the home fans something to cheer about despite the mood dampening when Vardy trudged off injured.

West Ham looked well beaten at the break but they may have sensed the anxiety among the Leicester players and fans because they looked a more threatening side at the start the second half.

Noble stepped up confidently to put away the penalty - which was given after minimal contact from Ndidi on Sebastien Haller in the box - and Manuel Lanzini came close to an equaliser when he almost poked in a loose ball from Michail Antonio's rebounded flick.

Leicester rode the simmering pressure and began to settle again - Iheanacho and James Maddison being denied before Perez eventually thumped in the third goal from the spot after Angelo Ogbonna's clumsy tackle on Iheanacho.

The job was done for Leicester, who continued to pepper Randolph's goal, but Perez doubled his tally with a slick finish from inside the box.

The victory leaves Leicester 14 points ahead of fifth-placed Manchester United, while West Ham remain level on points with second-bottom Watford and without a win in three successive league games.