I will be here, no matter what happens - Pep Guardiola

Manchester City boss Pep Guardiola says he will 100% stay at the club and believes the "truth will prevail", after City's ban from European competition.

Premier League champions City have been given a two-year Champions League ban and fined 30m euros (£25m) by Uefa.

City say they will launch an appeal at the Court of Arbitration for Sport.

"We appeal. When someone believes they are right they have to fight," Guardiola told Match of the Day.

"We are professionals on the pitch, what happens off it we cannot do much [about]."

Speaking to Match of the Day after Wednesday's 2-0 Premier League win over West Ham, he added: "We talked about what we have to do until the end of the season, especially for the people who love this club.

"We will play our game the best as possible. We have a lot of interesting things to play for."

Asked if he will stay regardless of the outcome of the appeal against the European football ban, he said: "If they don't sack me I will be here. I love this club. I like to be here. This is my club and I will be here, no matter.

"The club has to fight and I trust the club 100%, what they have done and they have explained to me.

"This situation is not finished and we will wait but until the resolution is not done you have to play and play and that is what is going to happen." 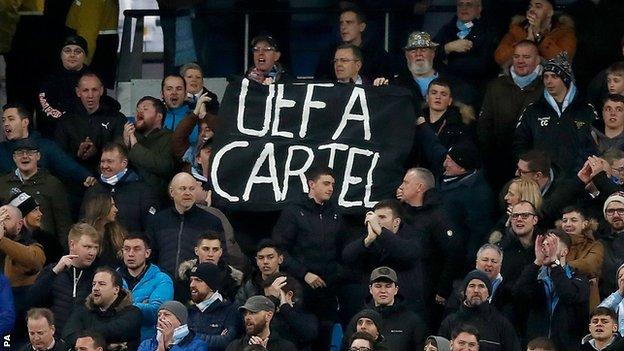 The independent adjudicatory chamber of the Club Financial Control Body (CFCB) said it found City had broken the rules by "overstating its sponsorship revenue in its accounts and in the break-even information submitted to Uefa between 2012 and 2016", adding that the club "failed to cooperate in the investigation".

On Friday, City said they were "disappointed but not surprised" by the "prejudicial" decision and would appeal, and on Wednesday City's chief executive Ferran Soriano insisted allegations against the club are "simply not true".

In City's first game since receiving the ban, goals from Rodri and Kevin de Bruyne saw Guardiola's side return to winning ways after the winter break, while there was a defiant reaction from their fans inside the ground.

There were frequent anti-Uefa chants in the first half, and some supporters brought banners, including examples reading 'Uefa cartel' and 'Uefa mafia'. There were also plenty of songs in support of manager Pep Guardiola and the club's owner Sheikh Mansour.

When asked about Barcelona president Josep Maria Bartomeu supporting Uefa over City's punishment, Guardiola said: "I don't know if they spy me but they know me, it is not necessary to spy me.

"If they are happy we are suspended, I say to the president of Barcelona, give us two appeals," the 49-year-old added.

"I ask right now the people trust what they have done. Don't talk too loud Barcelona. That is my advice, because everybody is involved in situations.

"We are going to appeal and hopefully in the future we can play Champions League against Barcelona."