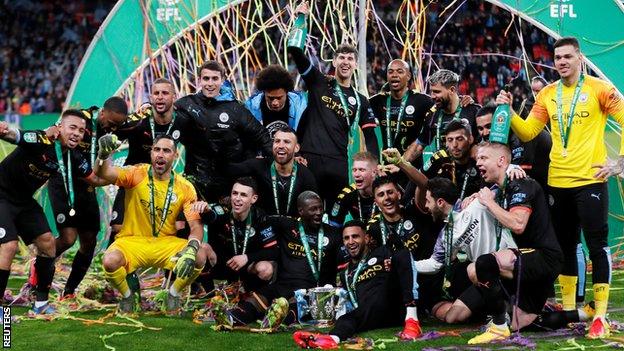 Manchester City secured their third League Cup win in succession - and their fourth in five years - with victory over Aston Villa at Wembley.

Pep Guardiola's side won an historic treble of domestic trophies last season with the Premier League and FA Cup, and they thoroughly deserved their triumph despite a spirited effort from Aston Villa.

Manchester City looked like they would stroll to victory when Sergio Aguero's strike and Rodri's header from a corner that was hotly contested by Villa put them in complete control inside 30 minutes.

Villa, while strictly second best, offered themselves a lifeline when Mbwana Samatta headed in from Anwar El Ghazi's cross four minutes before the interval.

City continued to dominate as they sought a third goal and Villa were agonisingly close to forcing extra time when Bjorn Engels saw his header from a corner turned on to the woodwork superbly by keeper Claudio Bravo.

It was their last chance and City closed out the win their superiority merited. 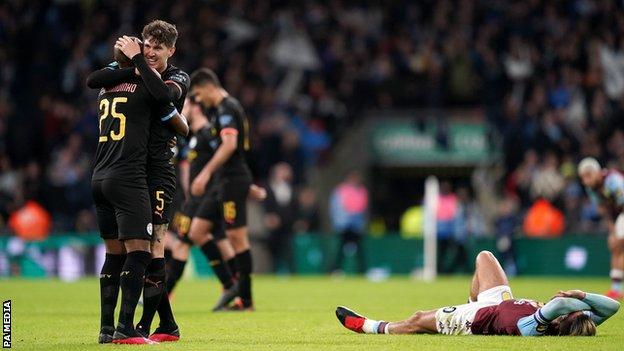 Manchester City may be about to lose their Premier League title to Liverpool, who are 22 points clear at the top of the table, but no-one can argue against their claims to the first piece of domestic silverware this season.

They were in control of most of this game apart from a frantic closing spell where the much-maligned 36-year-old Chilean keeper Bravo produced that stunning save from Engels to break Villa hearts.

If there is any frustration - and there will not be much - for Guardiola and his players, it is that they should have had this game done and dusted without any need for late moments of anxiety.

Aguero once again proved he is the man for all occasions with his predatory strike, while 19-year-old Phil Foden demonstrated his rich promise with a fine performance, which even contained a piece of audacious ball-juggling in the second half.

John Stones slipped unfortunately for Villa's goal but he also contributed some vital defensive headers when City finally had to survive some concerted pressure in the closing minutes.

Fernandinho continues to be a towering presence and it was a win achieved with Kevin de Bruyne on the bench for the first hour.

It has been an outstanding week for City as they followed up Wednesday's Champions League last-16 first-leg win away to Real Madrid by lifting the EFL Cup.

Villa can take heart in defeat 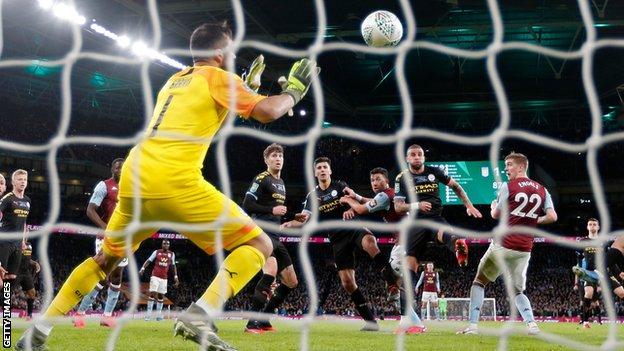 Aston Villa's players and staff gathered in a huddle after the final whistle for a rallying call for the battles ahead - which will be needed as they lie in the Premier League relegation zone.

They will feel they were served up an injustice with the corner that led to Rodri's goal but they can take some solace from the manner in which they stuck to their task, showed resilience and almost forced this EFL Cup final into extra time.

There was frustration for Villa's star man Jack Grealish, who could not exert any serious influence and, of course, there will be the pain of defeat.

It is a fact that Villa's main priority this season is Premier League survival and they demonstrated enough here to give them encouragement that they can achieve that mission, starting at Leicester City on 9 March.