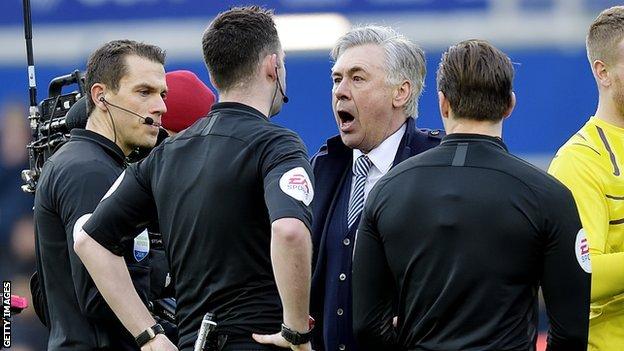 Everton boss Carlo Ancelotti has been charged with misconduct by the FA after being sent off following the draw with Manchester United.

The Italian approached referee Chris Kavanagh at the final whistle after Dominic Calvert-Lewin's late goal was ruled out for offside.

Ancelotti will not get a touchline ban but will be fined £8,000 if he accepts the charge before Thursday's deadline.

That figure would rise to £12,000 if an appeal is made and is unsuccessful.

The 60-year-old said after the 1-1 draw at Goodison Park that he was not disrespectful to Kavanagh, whose initial decision to award the stoppage-time goal was reversed by the video assistant referee because Everton's Gylfi Sigurdsson was lying offside in front of United goalkeeper David de Gea.

Ancelotti said he also had a subsequent, private conversation in which he spoke to the referee "calmly".

Although the Toffees boss was the first manager in the Premier League to be shown a red card, the rule was only introduced this season by the International Football Association Board to improve the visibility of such actions. It was already possible for managers to be dismissed.