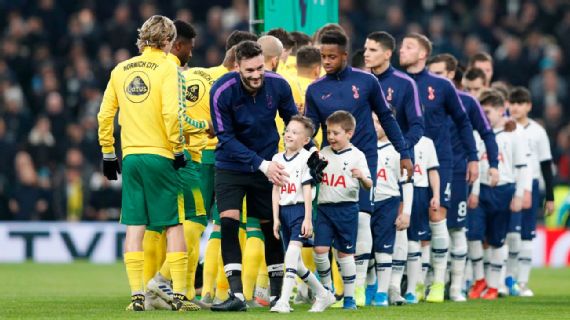 Teams will no longer shake hands before matches, the Premier League announced on Thursday. Photo by ADRIAN DENNIS/AFP via Getty Images

The Premier League has taken steps to help prevent the spread of coronavirus by stopping the pre-match ritual of the Fair Play Handshake.

From this weekend onwards, opposing teams will line up without shaking hands prior to kick-off due to concerns over the virus being spread by hand-to-hand contact.

"Clubs and match officials will still perform the rest of the traditional walk-out protocol ahead of each fixture.

"On entering the field of play, the two teams will continue to line up, accompanied by the Premier League music, then players from the home team will walk past their opposition without shaking their hands."

"Clubs and match officials will still perform the rest of the traditional walk-out protocol ahead of each fixture.

"On entering the field of play, the two teams will continue to line up, accompanied by the Premier League music, then players from the home team will walk past their opposition without shaking their hands."

Premier League club Newcastle United were the first to introduce a handshake ban in late February. While Ligue 1, in addition to a ban on handshakes, on Wednesday prohibited its players to enter the field holding hands with young mascots when the teams enter the field. And the NBA has recommended its players should utilize fist-bumps over high-fives with fans and avoid taking items such as pens, balls and jerseys to autograph, according to a memo to teams obtained by ESPN.

In Italy, all sporting events including Serie A fixtures are to be played behind closed doors until April 3, while next week's Champions League tie between Valencia and Atalanta in Spain has also been scheduled to take place without spectators present.

Danish club Brondby said it has quarantined 13 people, including a player and an assistant coach, after coming in contact with former Denmark international Thomas Kahlenberg, was diagnosed with coronavirus.

While the Premier League's move highlights the growing concerns over the spread of coronavirus, games in the English top flight have so far remained unaffected by the outbreak.

England's friendly against Italy at Wembley on March 27 is still due to go ahead, although the English FA will be guided by the UK government on any possible postponement.

Coronavirus, officially known as COVID-19, is a new strain of coronavirus that has surged around the globe in recent months. The coronaviruses are a family of viruses that cause illnesses ranging from the common cold to more serious respiratory diseases. Flu is caused by a different virus. There is no vaccine for coronavirus, though researchers are working on one and hope to begin testing soon. Older people, especially those with chronic illnesses such as heart or lung disease, are most at risk.

The coronavirus spreads mainly through coughs and sneezes, though it also can be transferred from surfaces. The best way to prevent infection is by frequent hand-washing, cleaning surfaces with regular household sprays and wipes, and avoiding close contact with people who are sick.