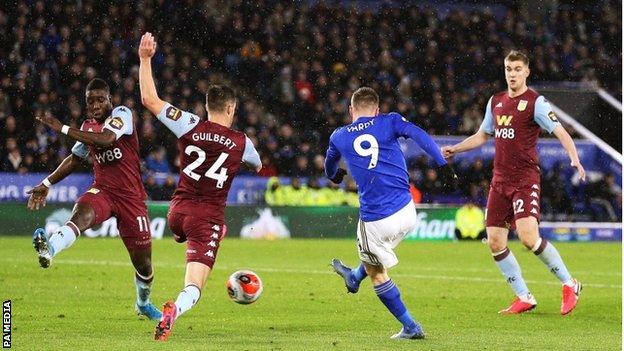 Jamie Vardy had not scored since 21 December

Leicester City manager Brendan Rodgers thought his side looked back to their best as Jamie Vardy ended his goal drought in their convincing win over Aston Villa.

They led through Harvey Barnes' goal after the winger took advantage of visiting keeper Pepe Reina's baffling decision to run out of his box.

Vardy's first touch after coming on was to score a penalty after Tyrone Mings' handball, before he smashed in at the near post - his first goal in 10 games.

Barnes scored his second from a Marc Albrighton cross.

"It was a very, very good win. An important win," said Rodgers. "The past few games we haven't been at our level. In terms of attacking, we were much better this evening. After the first goal we went on and played very well.

"We want to win and early on you could see our confidence wasn't where it has been. The only way you regain that confidence is hard work and these players have been brilliant. Tonight the intensity was there and we didn't give away too much."

Dean Smith's Villa remain in the relegation zone after a fourth consecutive league defeat, and a fifth in all competitions.

"Individual mistakes are costing us. We need to get better at it. Teams capitalise on our errors," said Smith.

Vardy back with a bang

Leicester had missed Vardy for a couple of weeks with a calf injury, but really they had been missing his goals since 21 December when he last scored against Manchester City.

Since then he had gone nine games in league and cup without scoring - although he remains the top scorer in the Premier League, now with 19 goals.

Foxes manager Brendan Rodgers said it was no coincidence their recent blip - two points from four games - came during midfielder Wilfried Ndidi's absence. Ndidi was back, and so too is Vardy.

Leicester were already ahead when the 33-year-old Englishman replaced Kelechi Iheanacho after 59 minutes. The first thing he did was slot a spot-kick down the centre after Mings had been penalised for handball.

The ball appeared to hit centre-back Mings' shoulder - but the decision stood after a check by the video assistant referee. Smith fumed afterwards at a "very, very harsh" decision that killed the game.

Vardy only had seven touches of the ball - but two of them were goals. His second arrived after his attempted cross had come back to him, allowing him to rifle past Reina at his near post.

That was a particularly impressive goal, starting with defender Jonny Evans winning the ball outside his own box before he played it forward to Barnes, who found Vardy.

"Vardy looked bright in his running and his movement was very good," said Rodgers. "He's struggled since December with injuries, but he looked all over it."

Leicester's fourth gave them a scoreline their performance deserved - Barnes, who merited his second goal for an industrious performance, blasting home from Albrighton's cross.

Rodgers said: "Harvey has got a very bright future. He's been getting better, his intensity and hunger to get in and score is what we've spoken about, and now he gets in there regularly and he's getting goals. I'm delighted for him."

Villa's cup keeper Orjan Nyland played well in their Carabao Cup final defeat by Manchester City last Sunday and there was some talk that he could keep his place instead of Reina being recalled. Manager Smith may wish he had done just that.

Leicester were already on top without finding the breakthrough when Reina decided to run about 20 yards outside his penalty area in an attempt to cut out Albrighton's long ball to Barnes. Why he did so was a mystery, with several defenders running back into position.

Barnes took advantage by nipping the ball past the Spaniard - the oldest player to make an error leading to a goal in the Premier League this season - before scoring past two defenders on the line from 20 yards.

"Pepe came out for a ball he wasn't going to get and made Barnes' goal easy," said Smith. "One of my biggest regrets was how we gave the ball away so cheaply against a team who want the football.

"We've probably made more individual errors than anyone his season." 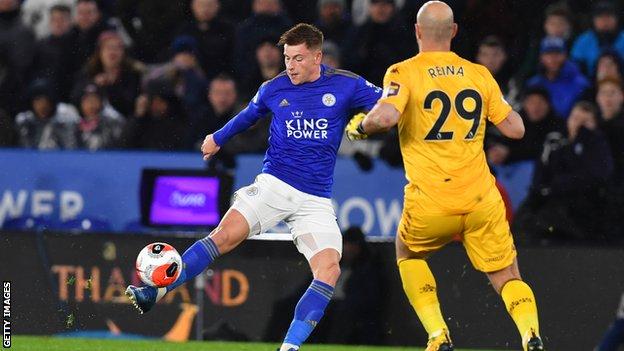 Villa had a glorious chance to move out of the relegation zone with none of the five teams above them winning this weekend. They had a bright start at the King Power Stadium with Conor Hourihane and Mbwana Samatta going close to getting on the end of set-pieces.

But that was their best spell of the game and Frederic Guilbert's 78th-minute effort, which was easily held by Kasper Schmeichel, was their only shot on target.

Villa have lost all five games since beating Leicester in the EFL Cup semi-finals. They will need to improve drastically if they are to stay in the Premier League, especially as their next four games are against sides currently in the top six - Chelsea, Wolves, Liverpool and Manchester City.