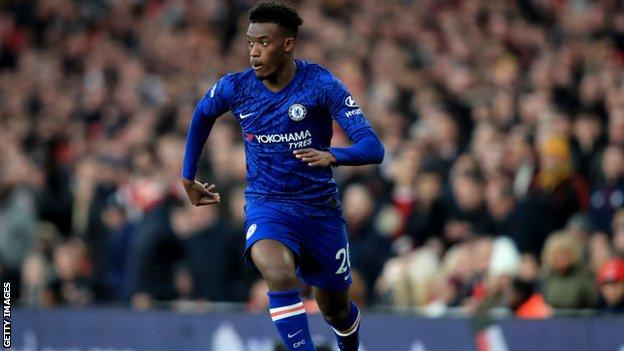 Callum Hudson-Odoi is self-isolating after testing positive on Monday

All Premier League games, EFL fixtures and matches in the FA Women's Super League and Women's Championship have been postponed until at least 3 April.

Everton's squad joined those of Chelsea and Arsenal in self-isolation after one of their first-team players showed symptoms of the virus.

Chelsea say Hudson-Odoi "displayed symptoms similar to a mild cold on Monday morning" and stayed away from the the training ground.

The club added that the player is "doing well and looking forward to returning to the training ground as soon as it is possible".

On Friday, the 19-year-old tweeted a video where he said: "As you may be aware I had the virus for the last couple of days which I have recovered from.

"I am following the health guidelines and self-isolating myself from everybody for the week. I hope to see everybody soon and hopefully will be back on the pitch very soon."

Official advice from Public Health England is that most people will no longer be likely to transmit the virus seven days after the onset of symptoms. However people who have had contact with a confirmed case but not yet displayed symptoms should self-isolate for 14 days.

The Gunners have closed their training ground and club staff who had recent contact with Arteta will also self-isolate.

"This is really disappointing," said Spaniard Arteta, 37. "I took the test after feeling poorly. I will be at work as soon as I'm allowed."

Arsenal say they expect a "significant number of people" will self-isolate, including the "full first-team squad".

"The health of our people and the wider public is our priority and that is where our focus is," said Arsenal managing director Vinai Venkatesham.

"We are in active dialogue with all the relevant people to manage this situation appropriately, and we look forward to getting back to training and playing as soon as medical advice allows."

Arsenal said Marinakis, 52, met a number of their players when the Gunners hosted the Greek side in a Europa League match two weeks ago.

The club said no players or staff would be tested for coronavirus.

Manchester City defender Benjamin Mendy is self-isolating as a precaution after a member of his family was admitted to hospital displaying symptoms of coronavirus.

How things unfolded on Thursday:

17:25 GMT - Prime Minister Boris Johnson says the UK government is considering banning sporting fixtures - but it will not happen immediately.

21:30 GMT - The Premier League announces all this weekend's games "will go ahead as scheduled".

22:33 GMT - The Premier League announces it will hold "an emergency club meeting" on Friday to discuss future fixtures.