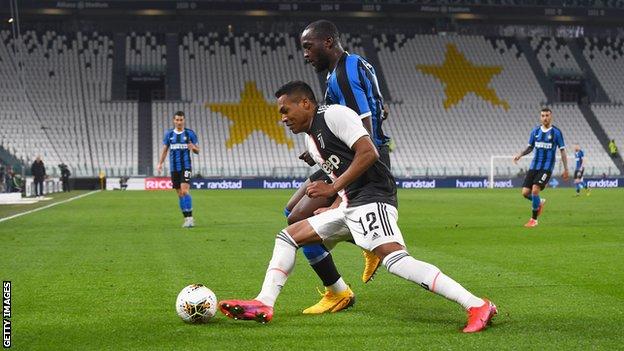 The Italian Football Federation has called for the postponement of Euro 2020 to give time to complete the Serie A season, which has been suspended because of coronavirus.

Federation president Gabriele Gravina says the idea will be put to Uefa at an emergency meeting on Tuesday.

Serie A was suspended last Tuesday, with Italy the European country worst affected by the virus.

"We will propose that Uefa postpone the European Championship," Gravina said.

Speaking to television channel Sportmediaset, the Italian added: "We will try to get to the end of this championship [Serie A] because it is fairer and more correct after the many investments and sacrifices of our clubs."

Uefa has invited representatives of its 55 member associations to Tuesday's video conference meeting, with Euro 2020 due to take place from 12 June-12 July at venues across Europe.

The boards of the European Club Association and the European Leagues, and a representative of world players' union Fifpro have also been invited and discussions will cover all domestic and European competitions, including the possible postponement of Euro 2020 by one year.

The Italian Football Federation had previously said the Serie A season may not be completed and offered alternatives including play-offs, not having a champion for 2019-20 or declaring the current standings final.

Gravina now hopes the league could finish by 30 June, one month later than scheduled, but admitted it could be extended for another month and suggested players should not train at the moment.

"If the league were to resume at the beginning of May, I would leave the question of training for the moment," he said.

"Let's leave the boys at home, they have to recover physical and mental energy."

The league was suspended on Thursday after the Real Madrid squad went into quarantine, while five Valencia players and staff have tested positive for coronavirus.

Spain is the second worst-hit country in Europe after Italy and is set to declare a national lockdown on Monday.

"I am convinced that we are going to end the season. We are working with other leagues to match dates," Tebas told Cadena COPE.

"I have had contacts with Italy, Germany. The approach for now is to see what happens on Tuesday with Euro 2020 and then decide.

"The news is to see how we finish the championship if there is no Euro because, if not, we are going to have serious problems.

"We must be in good health, which is the first thing, of course. If the competitions are suspended, everything is reviewed and the income is much lower.

"All team budgets will be compromised if the competition is not over, but I am convinced that it will end."