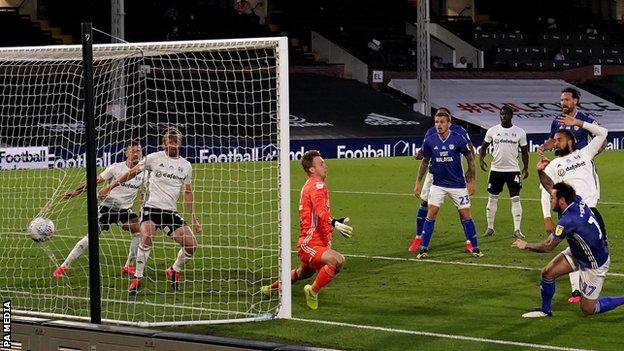 Fulham withstood a gutsy fightback from Cardiff to reach the Championship play-off final despite losing the second leg of their semi-final.

Cardiff won 2-1 on the night at Craven Cottage courtesy of goals from Curtis Nelson and Lee Tomlin, as Neeskens Kebano levelled for Fulham moments after Nelson's headed opener.

But despite a nervy second half following Tomlin's volley, Fulham's 2-0 first-leg lead helped them progress 3-2 on aggregate to a Wembley final against Brentford.

It keeps Fulham's chances of an immediate return to the Premier League alive while Cardiff's attempts to secure promotion back at the first time of asking are over.

Needing to create history by being the first team to overturn a two-goal first-leg deficit in a second tier semi-final, Cardiff thought they had made the ideal start when centre-back Nelson rose at the back post to head in Joe Ralls' corner.

But just 24 seconds later, Fulham were level and back to being two goals clear on aggregate.

Straight from the restart, Kebano swept in right-footed ahead of Cardiff right-back Leandro Bacuna to meet Bobby Decordova-Reid's low cross from 12 yards out.

Kebano, who had also netted a brilliant free-kick in injury time of the first leg to put Fulham seemingly in command of the tie, had appeared to dash Cardiff's chances of a spirited comeback.

Fulham continued to test Alex Smithies in the Cardiff goal before half-time, but good saves from Cyrus Christie and Anthony Knockaert efforts kept the scoreline level on the night.

Scott Parker (left) and Tom Cairney; Fulham players and staff kept celebrations to a minimum after the final whistle

With the visitors' opening attack of the second half, a Will Vaulks long throw caused problems in the Fulham penalty box - Nathaniel Mendez-Laing's header was parried away by Marek Rodak but centre-back Michael Hector was unable to force it clear, allowing Tomlin to pounce with a volley just inside the post.

But despite Fulham jitters, Cardiff were unable to capitalise. Smithies again had to make impressive saves to twice deny substitute Aboubakar Kamara, the second a fingertip deflection on to the base of the post.

At the other end, Rodak still had to be alert to maintain the home side's advantage when he first blocked a close-range effort from Robert Glatzel and then leapt back to his feet to tip over Vaulks' long-range drive.

Cardiff kept pushing to the end for the third goal that would have forced extra time and Glatzel came within inches of doing so deep into stoppage time when he volleyed narrowly over the crossbar from Callum Paterson's nod-down.

It was not to be for the visitors, who sunk to their knees at full-time while Fulham breathed a sigh of relief.

Fulham's aggregate victory sets up an all-west London final on Tuesday against Brentford, who themselves saw off opposition from south Wales in the shape of Swansea on Wednesday.

Just four and a half miles separate the two clubs, who finished fourth and third respectively in the regular season.

Their counter-attacking styles of play, which produced goals aplenty in the regular season, should make for an attractive final.

Fulham's bid to make an immediate return to the Premier League has been boosted by a eight-game unbeaten run stretching into the play-offs, which at one stage gave them the chance to grab the second automatic promotion place at both West Brom and Brentford's expense.

What made their semi-final success over Cardiff all the more impressive was the fact it was done without Championship golden boot winner Aleksandar Mitrovic. The Serbia international again missed out with a hamstring strain, which could also put his participation in Tuesday's final in doubt.

While Mitrovic has been an absentee, the likes of Decordova-Reid, Onomah and Kebano have stepped up to provide the attacking flair alongside the more established names of Knockaert and captain Tom Cairney.

Cairney was the match-winner on Fulham's last Wembley visit just two years ago, when they beat Aston Villa 1-0 in the 2018 Championship play-off final.

A step too far for Harris' Cardiff

While one side retains hopes of an immediate top-flight return, for Cardiff that dream came to an end.

Manager Neil Harris transformed their seemingly stuttering campaign when he took over in November following Neil Warnock's departure and lifted them from 14th to an eventual fifth-placed finish.

Nelson's early goal hinted that a memorable away triumph was on, but they failed to threaten again before half-time once Kebano produced the instant equaliser.

Having shuffled his side slightly from the first leg, it was the introduction of two players who dropped out that helped them retake the second-leg lead.

But Tomlin later had to limp off with a hamstring injury and that illustrated how Cardiff were always playing catch-up after losing ground in the first leg.