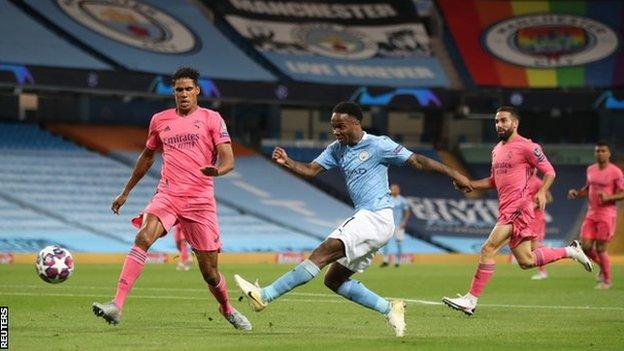 Manchester City finished off the job they started back in February by deservedly overcoming Real Madrid to reach the Champions League quarter-finals.

Pep Guardiola's side will now face Lyon in the one-game knockout format in Lisbon after inflicting Zinedine Zidane's first elimination from the Champions League, the French manager having won it three times in his three previous seasons in charge.

It was a victory City fully merited as their intense pressing game forced Real into numerous mistakes, with France World Cup-winning defender Raphael Varane in particular unable to cope with the pressing of Gabriel Jesus.

He robbed Varane to set up Raheem Sterling to score in the ninth minute but Karim Benzema's towering header before half-time set up the possibility of a tense second period.

City, though, created the better opportunities in an excellent performance - whereas Real missed the leadership and nous of central defender Sergio Ramos, who was suspended after being sent off in the first leg.

Without Ramos alongside him, the uncomfortable Varane made another error when his headed back-pass fell short of Thibaut Courtois to allow the lurking Jesus to pounce in the game's decisive moment after 68 minutes.

Relentless City too strong for Real

City's superiority over Real was actually more emphatic than the scoreline suggests.

From the opening seconds, with Phil Foden in an advanced role and the Spanish champions unsettled by the mobility of Sterling and Jesus, City's relentless pressing and intensity gave them control.

It was epitomised by Jesus - who hounded Varane into submission - but City had stars all over the pitch, with Kevin de Bruyne producing some brilliant passes and Kyle Walker positive in defence and attack.

Goalkeeper Ederson was faultless when called upon and there were few signs of the defensive frailties that have undermined them in the Premier League this season.

If City perform like this against Lyon they will be difficult to stop, but the French side must not be taken lightly after disposing of Juventus.

The Champions League has always eluded City and has been out of Guardiola's reach since his glory days at Barcelona - but if this quality and discipline can be maintained, this could be the season that all changes.

Real Madrid captain Ramos was a noisy presence from his seat behind the technical area as he encouraged his team-mates on the pitch - but Zidane would have given anything to have him out there alongside them.

The 34-year-old remains a magnificent defender with real presence and at the Etihad Real paid a heavy price for his red card in the first leg of this quarter-final, played at the Bernabeu six months ago.

His organisation and composure was badly missed with his usual central defensive partner Varane - upon whom the burden of responsibility fell in Ramos' absence - suffering a personal nightmare.

Jesus was Varane's tormentor in chief, robbing him of possession to set up Sterling's opener - his 100th goal for the club - then chasing down his weak attempt at a headed back-pass to score City's crucial second.

Real have the quality of Benzema as a constant threat in attack but Ramos is still the glue that holds this team together and they came badly unstuck in the face of City's desire and energy.