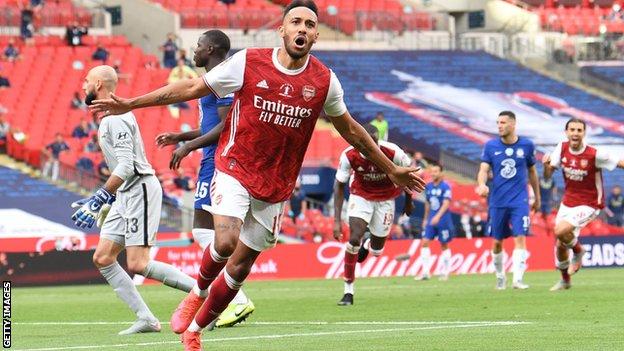 Arsenal captain Pierre-Emerick Aubameyang has signed a new three-year deal with the club.

The 31-year-old striker joined the Gunners in January 2018 and won the Premier League Golden Boot in his first full season in 2018-19.

"Signing for this special club was never in doubt," he said.

"I believe in Arsenal. We can achieve big things together. We have something exciting here and I believe the best is to come for Arsenal."

Aubameyang's contract was due to expire at the end of the 2020-21 season meaning he would have been free to talk to other clubs from January.

The Gabon striker scored in Arsenal's victory at Fulham on Saturday, the first game of the new Premier League season.

He also scored two goals against Chelsea in the FA Cup final in July, securing the Gunners' place in next season's Europa League.

"It was important for Pierre-Emerick to stay with us," said Arsenal boss Mikel Arteta.

"He's a superb player with an incredible mentality. Being the player to have taken the least amount of time to reach 50 goals with this club tells you everything you need to know about him and his way of working.

"He's an important leader for the team and a big part of what we're building. He wants to be up there with the best players in the world and leave his mark. He can achieve that here."

Since joining Arsenal, for a then club-record £56m, Aubameyang has scored 72 goals in 111 appearances in all competitions. In 86 Premier League appearances he has scored 55 goals and made 12 assists.

The 2015 African Footballer of the Year was made captain in November after midfielder Granit Xhaka was stripped of the role by Arteta's predecessor Unai Emery.