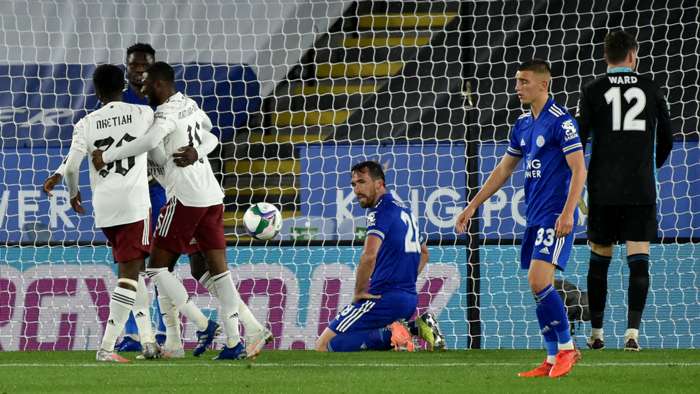 Arsenal continued their fine start to the 2020-21 season, easing past Leicester City in the EFL Cup on Wednesday

Arsenal are into the EFL Cup fourth round after Christian Fuchs' own goal and a late effort from Eddie Nketiah handed them a 2-0 win at the King Power Stadium.

Mikel Arteta made seven changes to the side that beat West Ham in the Premier League on Saturday and his new-look XI struggled to lay a glove on the hosts during a tepid first half.

They improved after the break, though, and opened the scoring shortly before the hour mark when Fuchs inadvertently put through his own net after Nicolas Pepe's shot had come back off the post.

Nketiah bundled home from close range in the 90th minute to seal the win and ensure Arsenal made it three wins from three at the start of the 2020-21 season.

Both goalkeepers were called into action inside the opening 10 minutes, Danny Ward tipping over Reiss Nelson's fizzing drive from distance and Bernd Leno denying Kelechi Iheanacho at the other end.

The lively Nelson missed a glorious opportunity to open the scoring shortly after the half-hour mark, firing wide from 12 yards after finding space at a corner.

Leicester almost went into the interval ahead but James Maddison's curled effort from 20 yards crashed back off Leno's left-hand post.

After a sedate opening to the second period, Arsenal forged ahead in the 57th minute. Pepe's initial shot was pawed away by Ward, but the Ivorian's follow-up shot from an acute angle flew back off the post into Fuchs and over the line.

Wes Morgan denied Arsenal a second, heading Nketiah's looping effort off the line, while Ayoze Perez inexplicably headed wide 10 minutes from time in what was comfortably the Foxes' best chance of the game.

Nketiah then added Arsenal's second late on, scuffing home from inside the six-yard box after substitute Hector Bellerin's mazy run, with Daniel Amartey somehow failing to clear the danger.